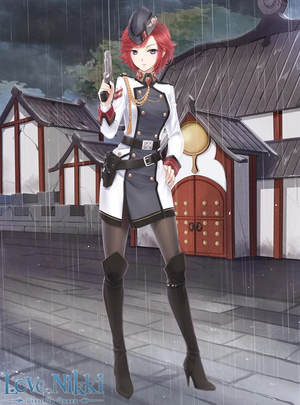 Soldier in the Snow Eagle Legion[4]

Ozeca is a character in Love Nikki. She is an officer in the Snow Eagle Legion in League Tyr, Nidhogg's army from the North Kingdom. She is from White Rock City in North Kingdom.[4]

Ozeca wears clothing typical of an officer, and has short, bright red hair; and purple eyes. She usually has a severe, intimidating and wary expression on her face.

Ozeca, like Nidhogg, is often impatient and has little time for chit-chat and games.[2] Described as "war-hungry", she takes war seriously and believes commitment is important. She also believes in the blood curse providing a false peace, same as Nidhogg.[5]

Ozeca was originally from White Rock City, the same city where Yunikina once formed the Snow Eagle Revolutionary Force. She later joined the modern-day revival of the group, the Snow Eagle Legion.[4][6]

Under the orders of Nidhogg, Ozeca took on the identity of "Ivetta" and began to work for the Acting Prime Minister of Lilith after Nidhogg left the position of Prime Minister. Her fabricated identity included studying at many famous design academies and earning a number of degrees. Her goal was to become a judge of the Court of Seven Kingdoms and influence the others there. A newspaper article was written about her achievements, which was read by Yvette, Nidhogg's former secretary, and Yvette's cousin Kiki.[3][1][7]

While she was working for the Acting Prime Minister, Yvette began to pursue an arrest warrant against Nidhogg with the Court of the Seven Kingdoms. Ozeca (as Ivetta) was assigned to help Yvette, saying that she could learn more about the Court of Seven Kingdoms. The two women formed a friendly relationship as they worked on the case together.[3]

One day, when Yvette and Ozeca were done working, they overheard a pair of strangers discussing Nidhogg's tenure as Prime Minister of Lilith. One claimed that they had always been able to tell Nidhogg was scum, while the other pointed out that Nidhogg may have done some good while he was in office. As they left, Yvette admitted that she too had admired Nidhogg while he was in office, but went on to say that Nidhogg wasn't the same person he had been, and that she would always choose Lilith.[8] Unbeknownst to her, Ozeca recorded the first part of what Yvette said using a recorder pen.[9]

Ozeca and Yvette went to the Court of the Seven Kingdoms by train. At one of the stops, Ozeca left to pick up a letter from the League Tyr instead of eating dinner, claiming it was a letter from her family, but Yvette caught sight of the League Tyr logo. While they were sleeping, Yvette stole the letter and read it, discovering that "Ivetta" was a fake identity and that she was in league with Nidhogg.[10]

At the Court of the Seven Kingdoms, after Yvette presented her case against Nidhogg, she also accused "Ivetta" of infiltrating the Lilith Government under a false identity to help Nidhogg. However, Ozeca claimed that the letter was a forgery, and then accused Yvette of being the one who was a spy. She supported this by playing back the pen recording of what Yvette had said earlier about admiring Nidhogg.[9]

Ozeca and Yvette were both taken to detention cells in the Court of the Seven Kingdoms. Ozeca dropped her friendly demeanor as "Ivetta" and took the opportunity to taunt Yvette, insinuating that she was useless and naive.[7] She also revealed her real name and the fact that she would fight alongside Nidhogg. She was then summoned back to the North Kingdom, telling Yvette, "The Colonel has come to save me. Where is your Prime Minister now?"[1]

In North, Ozeca apologized to Nidhogg for being unable to enter the Court of the Seven Kingdoms. She explained what happened with Yvette, to Nidhogg's surprise. He told her not to take any additional action on the situation.[11]

Ozeca refused to let Nikki and her friends pass her into Cloud City until they beat her in a styling battle. She was identified as a member of Snow Eagle Legion in League Tyr, though Bobo believed she did not deserve to be a part of something named after the legendary and historical Snow Eagle Revolutionary Force. Ozeca told them to stop talking about the history and battle her.[2]

When members of Iron Rose showed up to assist Nikki with the Dawnblade, Ozeca mocked Elle, saying that she didn't know what war is like and that she was used to a life of relaxation. Ransa threatened her, telling her not to forget how she offended the queen, before Nikki went on to battle Nidhogg.[12]

After the battle, she asked Nidhogg why he let Nikki and her friends go. He said it's his own business. She offered him the No. 7 Reagent, which could reduce his pain from the blood curse, but guessed that he did not need it after all. She then asked if they should contact "him", but Nidhogg said he will arrange it himself.[13]

Retrieved from "https://lovenikki.fandom.com/wiki/Ozeca?oldid=142645"
Community content is available under CC-BY-SA unless otherwise noted.