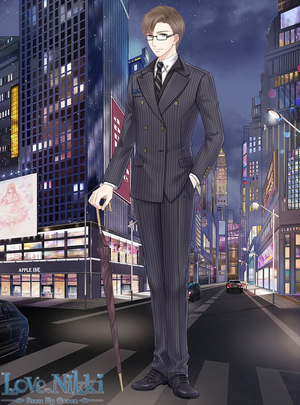 Officer of the Apple Federation

Orlando is a character in Love Nikki. He is a senior military officer of the Apple Federation.

Orlando is a tall man with a pleasant appearance, light brown hair and green eyes. He wears black top rimless eyeglasses and a black, pinstripe suit. The umbrella he carries is actually an electromagnetic gun that was given to him by his classmate Flynn.[13]

Orlando is a gentleman who treats others with respect. He is loyal and brave, especially when it comes to matters regarding his home nation, the Apple Federation. In his free time, he reads military books and plays chess. He also tells bad jokes.[9]

Orlando was bitten by a bulldog as a child. This led to a wariness around small animals that has continued into his adulthood.[14]

During this year, Orlando met a spirit called Eberne in Linsol, Pigeon.[15]

Orlando was a cadet at Apple Military Academy during this year, where he was best friends with a boy named Flynn.

During his time at the academy, he and Flynn found a black cat called Mr. Lancelot, who, unbeknownst to them, belonged to a girl at a welfare house named Nina. They put up a sign for him on the lost-and-found board of the house,[16] and when Nina found it they were able to meet up with her to discuss what should happen with the cat. Pets weren't allowed at the welfare house, so Orlando decided to keep Mr. Lancelot at his parents' house so that Nina could still visit him. This was done with some reluctance due to his distrust of small animals, but he couldn't bear to say no to Nina.[10]

Orlando, Flynn, and Nina met up every weekend for years so that Nina could visit with Mr. Lancelot, and during that time, they became close friends. During the year 668, a year after they had first met, Nina showed Orlando her designs, and he was so impressed that he offered to teach her so that she could improve, as he saw a lot of raw talent within her.[3]

Orlando was still attending the military academy, where he was the top of his class along with Flynn.[5] They stayed in a dormitory and played chess with each other, and Orlando was often the victim of Flynn's pranks.[17] However, he felt that Flynn should use his talents to create practical designs rather than designs for pranking people with.[18]

At the time of their graduation, Orlando and Flynn were both determined to win the title of "Immortal Glory", which was awarded to the graduate that performed the best during the end-of-year mission.[19] Their class's mission was to find a man named Jackson who had escaped with the design of a nuclear weapon in order to make a deal with an organization called Viper. Orlando was appointed the commander of the mission among his peers.[20] The night before the mission, Orlando was surprised to see Flynn making an electromagnetic gun disguised as an umbrella, and he implored his friend to go to sleep and rest up for the mission.[21]

The next day, Orlando took control of the mission at the Grand Canyon. He was hesitant to allow Flynn along given his lack of proper rest, but Flynn insisted he was okay.[22] Orlando and the rest of the class located their target, Jackson, inside a cave. However, they were ambushed by the Viper organization, who thanked them for leading them to Jackson and the nuke design. Under Orlando's command, they began to fight Viper, but a poison smoke bomb was released, sending the class into unconsciousness.[23]

The leader of Viper sent a poisoned dart at Orlando, and Flynn jumped in front of him at the last minute. In his last moments, Flynn told Orlando to trust him and that he had a backup plan. Though Orlando didn't want to take any risks, he decided to trust Flynn.[23] Flynn gave him the electromagnetic gun he had spent the previous night making. Though the Viper leader used a nearby gun to shoot Orlando, it was a decoy placed by Flynn, and Orlando used Flynn's real weapon to kill the Viper leader.[24]

Flynn died due to the poison, and Orlando was given the Immortal Glory. Orlando, however, continued to carry Flynn's inventions in memory of him.[13]

He came back to his house afterwards, where Nina was excitedly waiting to hear the results of their mission. Orlando was lost for words and struggled to break the news of Flynn's death to her. When it finally sunk in, he gave her a hug, and they both cried together while thinking of the missing member of their group.[25]

Orlando went to Moonlit City to investigate the Iron Rose's presence.[1] When he met Nikki and her friends, they discovered that they had similar goals, and that they both knew Kimi, who had told Orlando about Nikki's styling skills.[26]

Together they headed towards the Mayor's manor, and Orlando used his Apple Federation diplomatic token in order to enter.[27] They found out that the Mayor and Lunar cooperated in order to fool Iron Rose, and that the materials were safe the whole time.[28]

Orlando, concerned about the possibility of a malicious agent such as the Iron Rose doing something bad during the Fantasy Styling Contest, suggested to Nikki that she should attend.[29]

After the Apple Federation joined the war and the Apple Federation Apparel Group became compromised, Orlando took a bullet for Kimi to prevent her from being captured as well, and they escaped to a small shack in the forest near Lor River City with help from Zhu Ruosheng. They sent a message for Nikki to come visit them.[30]

Once she arrived, Orlando and Kimi explained the situation and how Apple Federation had joined forces with the League Tyr in order to fight Cloud. Orlando revealed his loyalty to his country, and said that he wants to fight with Apple in the war. Nikki expressed concern over what might happen if they found out he took a bullet for Kimi, but he remains sure in his loyalty to his homeland. They settled whether he should stay in a styling battle, which he won, so he left the shack to join the Apple military. He told the girls to keep themselves calm and remain focused from then on.[31]

Orlando discovered that Reid had hired Shade in order to steal the White Blossom. Before the White Blossom Banquet, he cooperated with Sofia in order to ensure it could be safely returned to Kimi. The day before the banquet, however, he lost Shade's trail. Orlando and Sofia were successful in returning the White Blossom to Kimi, who then decided to use it to draw out Reid. Orlando agreed to accompany her in this mission.[32] Inside the Apple Federation Apparel Group building, he helped her uncover security footage that showed what had happened to her dad.[33]

Reid showed up, and so did Shade, who shot at Kimi. Orlando managed to pull her back at the last minute[33] before drawing his own gun. He and Shade aimed at each other before Orlando recognized Shade as Flynn, his friend from military academy. The shootout ended with Shade killing Charles and taking the White Blossom. He told Orlando he was mistaken about his identity before disappearing.[6]

Though Kimi didn't understand how they could be the same person, Orlando was sure that Flynn is Shade, but wished it was not the case. He told Reid that he wouldn't get away with what he'd done before taking Kimi, Nikki, Bobo, and Momo to Losol to find out what happened to Kimi's father.[6] On the train ride, however, they discovered that Shade had been spotted near Losol via Orlando's communicator. Orlando used his credentials in order to try and get to Losol despite the military blockade around the city.[34]

Orlando decided to take Kimi and her friends with him to the League Tyr outpost outside the city due to how unsafe it would be to leave them alone.[35] Inside the outpost, he managed to hack their communications system and remove the order to target Kimi's father. Ozeca and Shade came into the outpost, and while Shade was in another room, Orlando snuck up on Ozeca and pressed his gun to her head.[36]

Shade was alerted to Orlando's presence by Nikki, Bobo, and Kimi's attempts to run away with White Blossom, but he told Ozeca he didn't have anything to do with White Blossom any longer. They manage to escape, leaving Orlando with Shade and Ozeca. Shade pointed his gun at Orlando and asked if he was going to thank him for letting them get away, before he said he was kidding. He then told Orlando they were even now in exchange for Orlando not firing before.[37]

Orlando took Kimi and her friends to Losol Church, where he asked Azula, a nun, to look after them while he investigated Schiller's kidnapping.[37] However, they were kidnapped from the church and taken to North.[38] Orlando next spoke to them electronically after they had been rescued over and assured them that he would bring Schiller back safe and sound.[39]

Orlando and Flynn were best friends and classmates at the Apple Federation Military Academy.[5] Though Flynn pranked him often, he clearly cared about Orlando, going so far as to take a bullet for him.[24] Orlando felt a lot of guilt for his death, wishing that he had never let him enter the cave.[25] He continued to mourn for him for years after he died, and talked to him about whatever was on his mind.[13] In the present, however, Orlando encountered again with Flynn, now under the identity of Shade, and he was surprised that he was still alive. But, the two became enemies for being on different sides of the war.[6]

Orlando encouraged Nina's design skills, considering her "gifted" and having "a keen vision and unique insights in design."[14] He began teaching her about design on the weekends they spent together. When she went away to travel the world and study design, she kept in touch with Orlando, writing him many letters. Nina sees him as a big brother.

Thanks to Kimi, Orlando learns about Nikki's existence and her talent, and he's not surprised when he finds her and she defeats him in a fashion duel.[26]

Some time later, when Kimi's family company is compromised, Orlando risks his life to rescue Kimi and take her to safety. He's wounded but succeeds, managing to reach the Cloud Empire with her.[30] After a talk and a fashion duel with Nikki, Orlando leaves to return to the Apple Federation.[31]

They meet in Moonlit City, when they are both 'targeting' the same person: the Mayor. Orlando is investigating rumors about her ties with the Iron Roses, whereas Nikki wants to rescue Lunar from her. He tests her skill and determination with a duel,[1] then praises her and they join forces to fill their objectives.[26] He also tells her to participate in the Lilith Fantasy Styling Contest to see what she can do.[29]

Eberne feels an intense loyalty towards Orlando, and views him as the one who helped to free him from his old master's seal. He admires Orlando for his firm belief and appreciates him as someone who believes in freedom.

Even though Orlando was not fond of small animals and was scared of Mr. Lancelot when they first met, he grew to see Mr. Lancelot as a comfort to have by his side as he took care of him for Nina, and Mr. Lancelot counted on Orlando in turn.

Orlando is the Italian version of the name Roland. The name Roland means roughly "famous land", and it was popularized after a legendary military hero named Roland who served under Charlemagne. 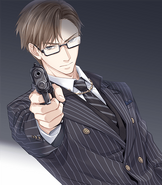 Retrieved from "https://lovenikki.fandom.com/wiki/Orlando?oldid=130197"
Community content is available under CC-BY-SA unless otherwise noted.