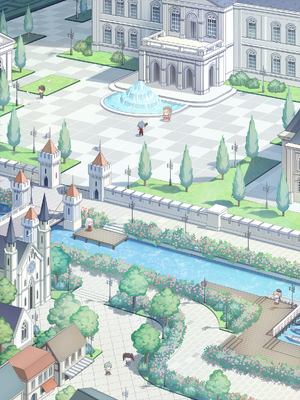 Oren is the capital city of Pigeon Kingdom.

The Palace is the home of Queen Elle. It features gardens, in which Elle prefers to spend most of her time, and the Royal Hall. Guards armed with swords patrol the palace, and they are known to be highly skilled in styling, able to beat any intruder that may come across them.[3]

Kingdom Monastery is the oldest monastery in Pigeon, as well as the largest.[2] It sits near the border of Oren and it is under the rule of Queen Elle, so all those who enter must have their names taken down.[4] King Sayet once resided within the walls of the monastery and left behind many of his old design drafts, though it's considered only a legend in the year 680.[2]

The interior is confusing and maze-like to outsiders, with several corridors and at least a couple guest rooms.[2] In the south tower is the Classic Collection Room, which is where Sayet's designs were hidden. Inside the room is a spiral staircase that leads down to a French window opening to the outside.[5][6]

The River Varna (瓦尔纳河, Wǎ'ěr nà hé) is the river that runs through Oren. It is famous for its picturesque Flowering Hedge Boulevard, a flower-lined street that runs alongside the river.[1] There is also a dock on the south side of the river where things are transported into the capital.[7]

Retrieved from "https://lovenikki.fandom.com/wiki/Oren?oldid=125070"
Community content is available under CC-BY-SA unless otherwise noted.