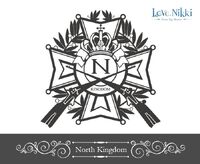 North Kingdom is one of the 7 Nations. Located in the north of Miraland, this war-like kingdom covered in snow is known for its mature and sexy styling for women. Its architecture features solemn strongholds. It is run by the King of North.

The emblem resembles a large stylized cross or four-pointed badge with a sphere on each tip and an N in the middle, resting above the word "KINGDOM". Two guns cross in front of it, while a ribbon and crown reside on the top. Behind the design is a leaf circlet or wreath.

Ancient North was formed in Year 1246 of the Star Era, before the New Era. In year 1590, after a struggle for power between four princes, Ancient North was split into four different nations.[2]

In Year 264 of the New Era, King Movan united the different nations in North into the North Kingdom it is today.[3] He used a military conscription system in order to consolidate power, but this system was later abolished due to overwhelming criticism.[4]

During Year 580 of the New Era, Queen Catherine of North passed away. Under her rule, North Kingdom had been prosperous, and her death took the North Kingdom into a period of chaos. The power of the king was diminished, allowing for a political state where many warlords could coexist.[3][4]

At some point, the army Snow Eagle Revolutionary Force was created by the legendary warrior Yunikina in order to overthrow the lord of White Rock City. This followed the death of her lover Eagle, who was killed by the lord of White Rock City for spreading messages of hope and freedom through his music.[5] Yunikina fought for freedom and peace,[6] and these ideals are shared by many soldiers throughout North's history, continuing to the present day.[7]

One group called the Nameless Chivalric Order was established sometime after the foundation of the Blood Curse, the curse that causes those who use force to experience excruciating pain, in order to guard the secret key to the curse.[8] They were considered legends that only appeared during times of war in order to fight for the peace of North.[9]

The North Kingdom continues to be a place of war and bloodshed through the year 680, with its citizens fighting for North even from a young age.[10] Students attend military school in order to become warriors, and being part of the military is considered a point of pride.[7]

Outside of war, people in the North Kingdom ice skate and take pride in creating magnificent ice sculptures. They also have delicious hot pot.[11] They are said to be an areligious country, instead "believing in themselves".[12]

Nidhogg formed the army League Tyr sometime around or slightly before the year 680. It was named after a legendary warrior from North named Tyr. In the year 680, using this army and the power of other warlords from North, Nidhogg led an attack on Cloud City.[13] The king of North at the time, King Ryan, disagreed with these actions and called for the other nations to help him stop them.[14] 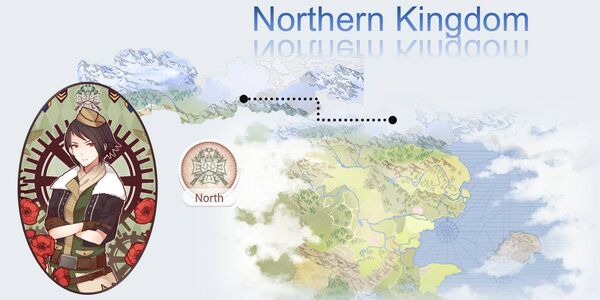 For a list of all locations, please see North Locations.

For a list of all characters, please see North Characters.