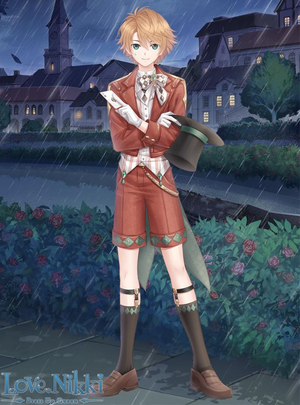 Star Lily Case Files
Parting in the Snow
V2: 1-4 Dove in the Midnight

Noah is a character in Love Nikki. He is a famous magician, as well as a member of a secret society which purportedly aims to bring peace to Miraland.

Noah is a short boy with a devious expression and light brown hair. He has a turquoise diamond on his cheek. His clothes consist of a striped pink-and-white shirt underneath a red jacket with gold-trimmed lapels and a matching red pair of shorts. He has black socks and brown loafers. The diamond design is incorporated throughout his outfit as well, appearing on his sleeve cuffs, in the shape of various jewels, and in the pattern on his shorts and socks. He carries a black top hat and an Ace of Spades playing card.

Noah is playful and seems to enjoy magic and surprises even when it's not an appropriate moment. He also shows a willingness to work against Bobo, even though he seems to admire her.

Noah is a magician, and seems to have magic powers that go beyond simple card tricks. He manages to make vines appear in the middle of the snowy mountains that are powerful enough to pull back an entire person.[1] He can also project images with the flick of a wand,[13] turn a pigeon feather into a handkerchief,[14] make a cane appear,[5] and disappear into midair.[15]

Noah also has a control over doves, or possibly a dove familiar, as he uses a dove to do his bidding on multiple occasions. When he first met Bobo, he gave her the dove with the condition that if she released it, he would come and tell her more about the organization he was part of.[16] He also used a dove three years later to steal her hair ribbon and lead her towards him,[17] and again to tear a page from a book and lead Nikki and Ransa around.[5] He has the capability to make the dove disappear with a snap of his fingers.[5]

Noah's mother was an alcoholic and abuser. After she gave birth to him, she blamed Noah for all her pain. Noah grew up in a dark mire of anger and torment of his mom, and he was never treated well. It pained him, but he longed for her love.[9]

During or before this year, Noah joined forces with an unknown person who only revealed themself in shadow who is known as the Lord, with the expressed goal of restoring peace to Miraland.

Noah later went to the Renieve Snowpeaks, where he saved Bobo from a gunman who was attempting to steal her father's design after killing him. Using magic, he caused vines to restrain the man and pull him away from Bobo, and took her father's belongings and handed them to her, introducing himself and telling her that he couldn't save her every time. He assured her that he wasn't her enemy before taking her home to Galevilla.[1]

He gave her some parting words of advice and an offer, telling her that she wasn't the only victim and that violence like what she had witnessed was normal in Miraland. He gave her a dove in a cage and told her that if she released it, he would return to her and tell her more about how she could help. After a month, she made the decision to release the dove, and he took her to meet the Lord, where she decided to join the same organization he was in.[16]

In Dwarf Town of the Pigeon Forest, Noah participated in a conflict between the dwarves and humans that lived there. The humans had accused the dwarves of stealing a necklace that belonged to a Duke Cesare,[2] and Noah escalated the conflict by using his magic to make it look like the Dwarf Chieftain Holtby had stolen it. However, Prince Chloris saw through the illusion and revealed it was only a magic trick.[11] Noah disappeared before Chloris and Holtby could find out more about him, but turned the stone necklace in Chloris' hands to an invitation to visit Duke Cesare.[3]

After this encounter, Noah later met up with Neva, who took him into the Royal City of Lilith so that they could receive an assignment together.[4]

Once Bobo returned from her incomplete mission to involve Nikki in the affairs of Miraland,[18] Noah greeted her in Royal City by sending a dove to steal her ribbon and leading her to a prank of his. There, they managed to catch up as he revealed what he had been up to, but she didn't want to talk about her own mission.[17]

Bobo went to meet with the shadowed Lord they worked for, and unbeknownst to her, Noah watched their meeting from the side of the room, hidden. After she left, the Lord instructed Noah to stay with Bobo and report on anything that happened.[10]

Noah followed her from Royal City to Galevilla, where he tried to surprise her, but she was too upset over discovering that her mother disappeared.[19] He gave her a handkerchief he turned from a white pigeon feather and told her that her mother couldn't be in any trouble since there was no sign of a struggle.[14] Bobo was still determined to find out what had happened to her mother, but knowing the truth, Noah told her that perhaps she should ask the Lord.[20]

The Lord's explanation that they hadn't been able to find Bobo's mother wasn't enough for her, so with Noah by her side, Bobo decided to look anyways.[20] Noah led Bobo down a few false routes, mostly investigating a man named Joseph who frequented a bar in northern Royal City, but Bobo began to feel that their searching was in vain.[21] Noah eventually admitted that he knew her mother was safe, and could even show her using his magic, but didn't because it would only hurt Bobo more to be able to see her but not touch.[13]

He projected images on a wall, showing Bobo's mother sitting in a plain room. Suddenly the voice of the Lord began to speak, and Noah made the picture disappear quickly.[13] He claimed the magic didn't work anymore and that someone was onto him. Bobo realized the voice belonged to that of the Lord, and though Noah denied the connection, she realized the Lord had been the one to take her mother, and that Noah and the Lord had been misleading her the whole time. After she accused him and asked how long it had been going on, he couldn't speak for a moment before insisting that he never wanted to lie to her.[22]

During the Star Lily Case Files event, Noah was preparing a show as a magician. Nikki and Starlet initially suspected him of being the culprit, stealing the necklace when the lights were out and hiding it in one of his props. However, this turned out not to be the case; Noah was fully searched.[8]

Noah and Bobo have known each other for years since he first rescued her[1] and they began to work for the same person,[16] and Bobo trusts him a lot. However, Noah is under orders to keep an eye on Bobo and make sure she doesn't find out the truth, especially about the fact that the Lord they work for had kidnapped her mother. He shows remorse when she finds out, but she is too heartbroken in order to forgive him.[22]

He does show a teasing side, and insists she's the most fun to play pranks on.[17] Sometimes his teasing goes too far, though, such as when she's upset over the disappearance of her mother and he calls her a crybaby.[13] He also made a doll modeled after Bobo. He had a tea party with the doll, but he left the tea party halfway through, causing the doll to feel sad.[23]

Noah and Neva work together and receive joint assignments, though the nature of their partnership is unknown. However, Neva is short with him like she is with everyone, and does not have much patience for his cheerful and chatty nature.[4]

Noah seemed to be the one person that the Lord wasn't actively lying to, as he seemed to be in on all their plans - from rescuing Bobo in the snowy mountains to listening in on the meetings that Bobo thought were one-on-one.[10] Though he seemed entirely loyal to the Lord, for the most part, he showed a sign of wavering when he showed Bobo images of her mother to prove that she wasn't dead, which ended up giving away the whole ruse.[22]

Noah is a name derived from the Biblical figure Noah. It is likely of Babylonian and Assyrian origin and comes from the word "nukhu" meaning repose or rest.

Retrieved from "https://lovenikki.fandom.com/wiki/Noah?oldid=165931"
Community content is available under CC-BY-SA unless otherwise noted.