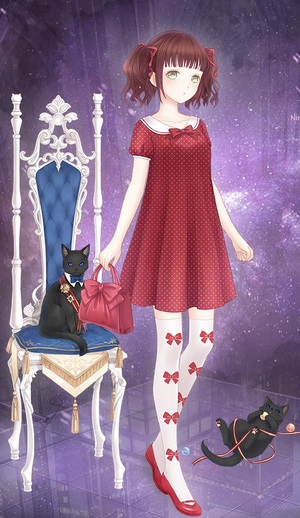 Silhouette of the Star City

Rosy Tour (recolor)
Nina is a character in Love Nikki. She is an intern at the Apple Federation Apparel Group and a close friend of Orlando.

Nina has naturally wavy brown hair. She often wears red because it reminds her of her favorite fruit, strawberries.[2] However, after she left Apple Federation, she dyed her hair light purple.[3]

Sweet and shy, Nina was withdrawn as a little girl, and bullies would target her because she was "cold" and "weird". She didn't always talk in complete sentences. However, she was good with animals, especially her cat Mr. Lancelot. She was also praised by her teachers, implying she was good in school. As she grew up, she smiled more and became more outgoing and adventurous, encouraged by her friendships with Orlando and Flynn.

As a child, Nina was diagnosed with autism. She tended to immerse herself in her own world and had no friends in the welfare house where she lived.[4]

Though there was a rule at the welfare house Nina lived at against having pets, she adopted a cat and named him Mr. Lancelot.[5] She considered him her friend rather than her pet, and she would feed him at the same time everyday at the balcony of the dorm.

One day when Nina was being bullied by two other kids, Mr. Lancelot leapt between them and hissed at them, scaring them away but also alerting them to the fact that Nina had adopted a cat. They reported Mr. Lancelot to a worker at the welfare house, Ms. Amanda, and Nina was forced to give up Mr. Lancelot. She looked everywhere for him, but the only hint she saw about him was a ripped note on the lost-and-found board about a black cat.[6]

She asked the receptionist, Grandpa Henry, about the note, and he offered to contact the boys who had left the note for her, though he warned her again that pets weren't allowed. Nina met Orlando and Flynn, two cadets of the Apple Military, who brought Mr. Lancelot. However, upon learning that she couldn't keep Mr. Lancelot, Flynn implored Orlando to keep him at his house, to which he agreed. They invited her to spend weekends with them so she could keep seeing him. Flynn also told her to think of them as her brothers from then on, since she was alone.[1]

Nina went on to visit Orlando and Flynn each weekend, and it became the highlight of her week. She began to smile more and more.[7] She also became more interested in designing, inspired by Flynn one day when he spoke about protecting the people he cared about. After he said that, she drew her first design,[8] and after a year of knowing Orlando and Flynn, she showed Orlando her designs. He praised her talent and offered to tutor her so she could become better.[7]

Nina became apprenticed to a designer named Mr. Wycliffe, who had formerly worked for the Apple Federation Apparel Group. It was considered a great honor, since he did not commonly take apprentices. Nina went to tell Orlando and Flynn, but found out they had left for their graduation mission. While she waited for them to come back, she designed and created suits for their graduation ball, and picked out a gift for Orlando to thank him for looking after Mr. Lancelot.[9]

However, only Orlando returned, oddly quiet. Nina thought he was trying to fool her at first by looking sad, and she expected Flynn to jump out and scare her, but Orlando told her that Flynn wasn't coming back. As Nina realized he had really died on the mission, she couldn't stop herself from crying and remembering all the memories she had with him. She hugged Orlando, both of them crying while thinking of the missing member of their group.[10]

Visiting the house where Flynn lived became too painful to her, and she chose to leave Apple and go travel the world with Mr. Wycliffe. However, she continued to communicate with Orlando through letters.[11]

Nina was accepted to Lilith Kingdom's Cicia School of Design during this year, taking a different path after her time studying with Mr. Wycliffe. Orlando commended her on this, saying she could learn a lot in a new atmosphere and that she could develop her own style.[12]

Nina returned to Apple and became an intern at the Apple Federation Apparel Group, impressing Kimi with her resume and Joe Brownie with her design style. She wasn't sure whether she wanted to continue with the group, but she loved designing and seeing her designs become reality.[8]

Nina reunited with Orlando and Mr. Lancelot as well, finding him at the welfare house after his butler told her where to find him. Nina also met Nikki, Kimi, Bobo, and Momo there. She and Orlando reminisced on their memories of Flynn.[8]

Nina sees Orlando as a big brother. Orlando encouraged Nina's design skills, considering her "gifted." He began teaching her about design on the weekends they spent together. When she went away to travel the world and study design, she kept in touch with Orlando, writing him many letters.

Orlando has said she has "a keen vision and unique insights in design."

Flynn inspired Nina to begin drawing her own designs. She loved him dearly and considered him a brother, and would laugh at his silly antics. His death affected her deeply, and she left to travel the seven nations with Mr. Wycliffe when memories of Flynn became too hurtful.

As a young adult, she remembers Flynn fondly and feels his presence with her.

Nina adopted Mr. Lancelot, and he became her only companion. He rescued Nina from bullies. When she was told as a child that she could not keep pets, she insisted that Mr. Lancelot was a friend instead of a pet.

Retrieved from "https://lovenikki.fandom.com/wiki/Nina?oldid=165398"
Community content is available under CC-BY-SA unless otherwise noted.