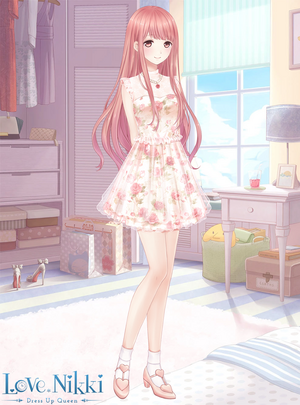 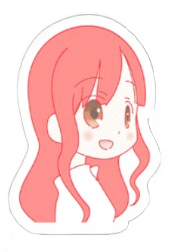 A Psalm of Time

Nikki is the title character and the protagonist of Love Nikki-Dress Up Queen!, as well as the other games in the series. She is a talented stylist who adores fashion, and she is accompanied on her journey by a small talking cat named Momo.

Nikki's appearance often changes as a result of her being a stylist who participates in style battles.

Her normal appearance is a fair-skinned teenage girl with waist-length pink hair, slightly wavy towards the end, that has navel-length forelocks and straightened bangs with a small split in the corner and warm, gentle amber eyes having a hint of pink and gold.

Her casual attire consists of a white and pink floral lace dress, white socks, a pearl necklace with a red rose charm, and pink heart heels.

Pure and very thoughtful, Nikki is a gentle and peaceful girl who has a tendency to attract the attention of others, either because of her sweet nature or her talent. She is very patient and understanding, and enjoys helping others with fashion advice, which is generally spot-on. However, she appears to be modest and possibly a little less confident than most.[6]

As she spends time in Miraland, Nikki grows to fondly treasure her memories there spent with her friends. She realizes she is dedicated to protecting the people of Miraland, even if she must pay a great cost. Even though she recognizes she was once a passive person, she makes a sincere effort to always stand up for her friends.[44]

When she isn't shopping or styling, some of Nikki's interests include reading novels, thinking about time travel, and coming up with love stories throughout history.[45] Her favorite foods include strawberry and chocolate ice cream[46] and honey bean rice pudding.[47] Back on Earth, her hobbies included origami and collecting cute things like postcards and pillows.[48]

Nikki has designed the following:

Tailor Class-Khaki
Add a photo to this gallery

Momo is Nikki's pet cat. Momo is hard on Nikki and often criticizes her, but it is clear that he believes in her and is pushing her to do her best. In return, she cares for him and brings him with her on all of her adventures.

Due to her lively personality and friendly nature, Nikki and Bobo became fast friends. They have a lot in common, such as the fact that they are both romantic people who enjoy weddings.[49] Though Bobo was ordered to accompany Nikki, they shared a genuinely close friendship.[50] When Bobo left Nikki to return home and her motives were called into question, Nikki refused to believe that Bobo could have done anything to hurt her.[51] After learning about what Bobo had gone through, Nikki made a resolution to find her so that they could go through everything together.[52] She later admits to herself that she never blamed Bobo and understood that she had a sincere heart despite the deception.[53]

Lunar is a girl from the Cloud Empire who made friends with Nikki when they met in Wheat Field, Apple. Her guqin design was stolen by Mela of the Iron Rose, and Nikki used her styling skills in order to get it back. Since then, they always made an effort to see each other when they were in the same place at the same time. When Lunar was in trouble, both in Moonlit City and later in Cloud City, Nikki went out of her way to help her and make sure she was okay.

Nikki looks up to Kimi, who sees Nikki as a stylist with great potential and encourages her to grow and improve her skill. She becomes one of Nikki's strongest supporters and helps her practice her styling before contests. In return, Nikki lets Kimi rely on her and comforts her, especially when Kimi reveals her struggles and difficulties.[54]

It is strongly implied that Kimi has romantic feelings for Nikki: Kimi prefers Nikki over Joe[55] and the sight of Nikki makes her blush.[56] For Valentine's Day, Kimi and Nikki buy matching pendants that show black and white swans with their necks entwined.[57]

Nikki's behavior around Kimi also indicates that she holds feelings for Kimi as well. Whenever she sees Kimi, she gets overexcited, to the amusement of Bobo and Momo. The two of them together can exude an energy that makes even Momo feel like a third wheel.[58]

Due to her abundant experience, calm mind, and impeccable judgment, Ace is Nikki's most reliable travel companion.[59] Nikki admires Ace for her kind heart, swordsmanship, bravery and decisiveness, as well as her free lifestyle.[60] She finds Ace to be "the most handsome girl with a ponytail".[59]

It is often noted by others how much they look alike, although they are not related. Nikki cares a lot for her and, when she's almost kidnapped in the Celestial Pavilion, Nikki decides to take her place and helps fend off her attackers.

Nikki and Yoyo care a lot about each other, even though they have disagreements. Yoyo looks out for Nikki, even going out of her way to find someone who damaged clothes Nikki was going to model in a design competition.[61]

While Nikki is in Miraland without her sister, she can't help but think about how much she misses her.[62] She even wishes on a star, hoping that her sister and father were okay without her.[36]

Yoyo also stole Nikki's clothing once on a trip to London, England.[63]

Nikki clearly loves and admires her mother. As a child, her mother dressed her up in princess dresses, causing other girls to be jealous of Nikki.[64] She also saved up money from a part-time job in order to buy a scarf for her mother,[65] and she thought her mother was beautiful.[66]

Retrieved from "https://lovenikki.fandom.com/wiki/Nikki?oldid=181382"
Community content is available under CC-BY-SA unless otherwise noted.