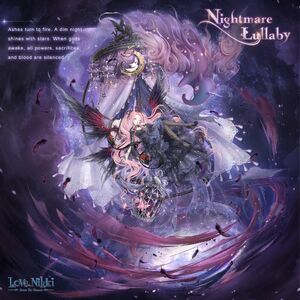 Ashes turn to fire. A dim night shines with stars. When gods awake, all powers, sacrifices, and blood are silenced.

Battle fire adds a deep mark on the curse. Abyss reveals from the gap. The buried royal blood has begun to boil.
– Star Mark

The scroll shows an absurd history, a tyrant crucified and countless people swallowed up after the power breaks.
– Long Night Degradation

From the start of human history, fights and wars have never left. The roots of sin shouldn't comment on God's will.
– Dark Night Abyss

Evil has no boundaries, and the world will sink in abyss until I become the only king and stop the sin.
– Sin and Punishment

No need to struggle, no need for freedom. God shepherds his people, fools sleep. The king will be the world's will.
– Lament Spine

Immediately surrender the true king. It may be painful to accept the sudden decree, but comes with endless joy.
– Rose Cage

Humans don't deserve these efforts. Once given freedom, they continue to fight and destroy themselves.
– Dark Ash

How to calm the war and fix the misled history? Rebirth of new king brings a final peace. I declare I'm the answer.
– Star Key

The resistance is just a thorn in the crown. The Savior legend is a lie. Mourn, then be happy because of ignorance.
– Lie Spine

The mirage wings are open, and humans will be sheltered forever. I'm the truth they seek. The world sometimes ends.
– Heavy Wing

I’m the never fading past, the true king of all. I will show the truth, control the present and future.
– Moonlight Dream

The world once said I am crazy. They don’t know the craziness of gods and fools are not the same.
– Stars Mark

Ashes turn to fire. A dim night shines with stars. When gods awake, all powers, sacrifices and blood are silenced.
– Long Night Sleep

Don't stop looking at the stars. Because then you'll understand how insignificant human is, and lose hope.
– Sky Gaze

A shadow roars through everyone’s dream. The whisper is a sign. The real king will wake up when the world sleeps.
– Dream Omen

Why reveal the night's curtain to feel the pain and loneliness? In dreams, the beautiful life will reach eternity.
– Veil of Maya

Humans are ridiculously obsessed with reality. Who can prove that everything tangible is not an illusion?
– Dream Cage

Under the big black wings, world fell into abyss for eternity. Let me make a wish and weave a new sweet dream.
– Nightmare Wing

Retrieved from "https://lovenikki.fandom.com/wiki/Nightmare_Lullaby?oldid=76186"
Community content is available under CC-BY-SA unless otherwise noted.