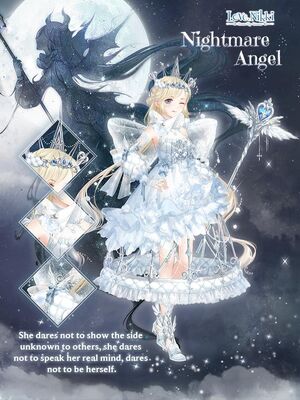 Nightmare Angel is a Lilith suit that could be obtained through Cumulative Recharge from October 16th to October 22nd, 2018, for 360

The angelic appearance of Felia is like her pure white hemline. Everyone says her heart is an impeccable jade.
– Silver White Poem

But Felia has her own secret. Her dance moves gradually fell into darkness.
– Snow Feather Rhythm

She is not the light, she is not the sea under starlight. There is a corner sunlight fails to reach.
– Snow Waves

She loves herself, but fears of being a disappointment. Felia never lives a day for herself.
– Snowy Kiss

But there is always a day when secrets are revealed. Felia stood before everyone as herself.
– Guardian of Star Sea

Felia thought she would feel bad when others leave, but now, she feels relieved and grateful for those who stay
– Silver Snow Wings

Felia didn't regret at the moment when dark devoured her. She cannot be an angel and a demon at the same time.
– Silhouette of Witch

Felia's eyes are deep blue like the deep ocean. Her smile is most beautiful and sincere.
– Sea Fog

Felia unleashed herself and danced the light moves in the name of an angel for the last time.
– Starlight Travel

Felia is a stunning, dancing angel who hides her true self. To others, she is light itself: pure and innocent. But in order to uphold that image, she conceals her dark side, keeping it a secret. She dared not to show it in fear of rejection. When the day came to reveal that secret, she was met by mixed opinions. She thought she would feel bad when others leave, but instead she felt relieved for those why stayed. She accepted the darkness and did not regret it one bit, dancing one last time as the angel she was known for.

Retrieved from "https://lovenikki.fandom.com/wiki/Nightmare_Angel?oldid=131016"
Community content is available under CC-BY-SA unless otherwise noted.