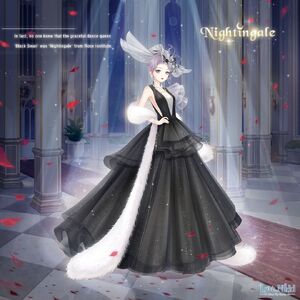 In fact, no one knew that the graceful dance queen 'Black Swan' was 'Nightingale' from Roce Institute.

Nightingale is an Apple suit that appears in the Dawn Front Event.

Nightingale paces in the magnificent palace. In the gentle zither, the white war seems only to be an illusion.
– Purple Gold Cuckoo

The first minute in the laboratory, the next onto the dance floor. Like a bird, she dances between light and dark.
– Song of Nightingale

No one could outsmart Nightingale. The Rosset Research Institute is renowned for its rigorousness.
– Snow Owl

Nightingale's wandering eyesight was undetectable. Hatred and arrogance were hidden in the winner's heart.
– Lone Butterfly

She looks for Xinglin in the crowd, who spread her wings to protect her favorite student from the darkness.
– Ice Lotus

Nightingale missed the inspirations that Lin gave her. Xinglin was a beautiful bird raised in her ivory tower.
– Lost Pearl in Ocean

Sadly, the bird in cage was eventually outcast. No matter where she is now, Xinglin doesn't want to care anymore.
– A Shadow on Water

Nightingale turned a blind eye to the dirty deals in Rosset. Sacrifice is unavoidable when a utopia falls.
– Wily Rabbit in Snow

There was a kid named Flynn next to White Bird who is just as clever as her. Maybe one day they will meet again.
– Forever Stunning

Except few insiders, nobody knows the black swan is the legendary 'Lady Nightingale' of Rosset Research Institute.
– Shadow of Chaos

The suit is about Lady Nightingale, the woman who once mentored Xinglin (Flynn's mother). She was a teacher at the Rosset Research Institute. She turns a blind eye to many of the dirty deals that the shady institute did, which resulted in Xinglin severing their friendship. 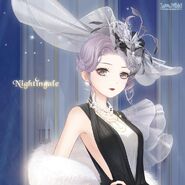 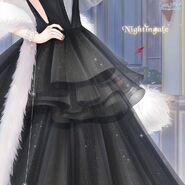 Retrieved from "https://lovenikki.fandom.com/wiki/Nightingale?oldid=136454"
Community content is available under CC-BY-SA unless otherwise noted.