The event had a pavilion that allowed players to use

to draw and gain materials for the suits Final Song, Overdrive Cycle, and Beat of Abyss. 1 free draw was given daily and more could be bought for 30

During the initial run of the event, the player could also receive

in addition to the event currency. During the event's return, the player could only receive

Each draw from the pavilion gave a number of Taboo Seal, which come in three types:

(Rusty Wings). Each of these event currencies corresponds respectively to the event's suits.

After collecting 10, 25, and 50 of each Taboo Seal, pieces of the suit were received. At 50 of a certain currency, the entire suit was received.

After 50 of a currency type is reached, it can be converted and exchanged into another Taboo Seal.

to get pieces of the Final Song suit.

to get pieces the suit Overdrive Cycle.

to get pieces the suit Beat of Abyss. 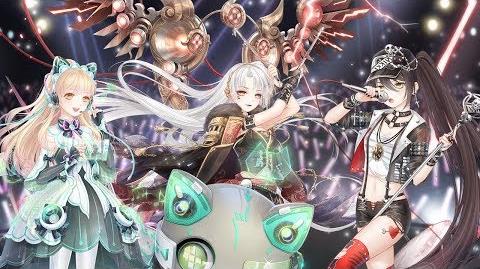 Retrieved from "https://lovenikki.fandom.com/wiki/Night_of_Starfall?oldid=123280"
Community content is available under CC-BY-SA unless otherwise noted.