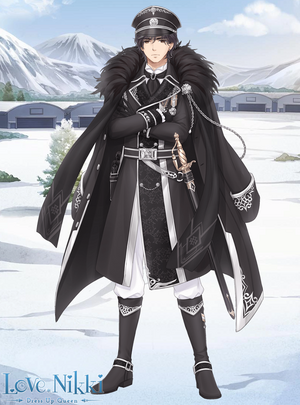 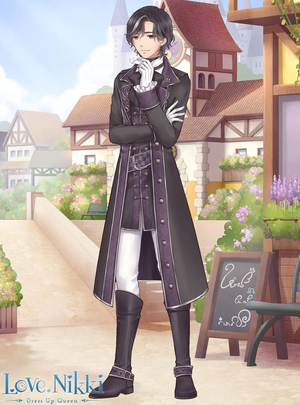 Colonel of League Till
Prime Minister of Lilith Kingdom (formerly)

Nidhogg is the main antagonist of Love Nikki. He is from the North Kingdom, but later won the favor of Queen Nanari with his famous Rose Dress and became the Prime Minister of Lilith Kingdom. His betrayal of the Lilith Kingdom and creation of a notorious army called the League Till resulted in a war between several countries of Miraland.

Nidhogg is a tall man with dark hair that has a streak of silver in his bangs. As prime minister, he tends to wear dark, formal clothes. Yvette describes his eyes as "deep and lonely".[5]

Nidhogg has a cool, calculating exterior, rarely cracking jokes. While generally strict and professional, he seems to have a soft spot for his timid secretary, Yvette,[6] who he keeps around despite her poor track record in fashion battles.[7]

Underneath his polite and cool facade, however, there's a deeply wounded and extremely ruthless man. He believes that Miraland is a deeply flawed place and that he must change it at all costs. As such, he is willing to betray the trust of the Lilith Royal Family and plunge the continent into an all-out war so he will be able to defy the "fake peace" coming from the Blood Curse, which harms anyone who uses force on others.[8]

Nidhogg has designed the following suits or items:

Nidhogg was born in North Kingdom, and he became an orphan at some point.[10] Following that, he was given a medal and named the defender of North Kingdom's royal city, alongside Louie, by a man who acted as a father figure to both of them. Nidhogg and Louie went on to fight together in the North Kingdom, trusting each other deeply with their lives.[11]

The man that knighted them died, and Nidhogg and Louie went to go visit his unmarked tombstone. Louie was agitated, but Nidhogg did not outwardly show emotion.[11]

Nidhogg went on to attend school, where he learned to design.[9] He later gained power by appearing at the Designer's Tea Party and designing a formal dress called the Rose Dress, and became Prime Minister of Lilith.[10][12][13]

Despite having moved to Lilith, Nidhogg was allied with Morrison, who was a mad scientist known publicly as a pharmacist. Nidhogg was involved in Morrison's attempt to have the key to the Blood Curse stolen, and when Morrison was captured by Louie and the Nameless Knights that were guarding it, Nidhogg stepped in to save him. Nidhogg asked Louie to hand over Morrison, and Louie refused. When it seemed neither would budge, Nidhogg ordered his people to attack, and a skirmish broke out. Nidhogg called an end to the fight after Morrison got critically injured and the leader of the Nameless Knights, Lionel, was killed.[14]

Nidhogg hired Yvette as his secretary at this time, much to the surprise of all of the workers in the Lilith government.[15] During her first interview, she wore the top Affection, which caught Nidhogg's eye.

On her first day, she bumped into him while they were on their way to work. She was being chased by a large dog, but to her embarrassment he calmly commanded the dog to go away.[16]

Yvette failed to perform well at her job, causing her to lose faith in herself. When Nidhogg learned of this, he coolly brushed off her concerns,[17] possibly in an attempt to make her feel better.

At this point in time, Nidhogg met with many strange people and refused to let the janitor clean his office, causing the janitor to wonder if he had picked Yvette because she was so clueless.[18]

On March 10th, Nidhogg left a gift box with a bunny called the March Hare inside it on his desk. Yvette, believing it was a gift for her birthday, tried to read the card that went along with it while she was alone in his office. Just then, he appeared, startling Yvette and causing her to spill coffee all over the card.[19] He reluctantly presented her with the bunny inside the gift box, telling her it was her birthday present.[20]

The March Hare had the ability to talk to Yvette while she is asleep, causing her to sleep badly the next night.[21] It claimed to be there to teach her about styling, on behalf of Nidhogg.[20] When he heard about this, he told her to forget what it said and throw the bunny away if she didn't like it.[21] She went on to treasure the March Hare and even designed for it.[22]

Nidhogg went to Cicia to watch the play 'Candy Witch and Star Sea'. He reprimanded Yvette for wasting time competing with Nikki and not even winning.[7] After the theft of the Star Sea, he evacuated with Yvette and the rest of the theater.[23]

Nidhogg formally met Nikki and her friends for the first time while on a cruise ship on the Celestial Lake in Cloud Empire. Nidhogg showed curiosity in Nikki as a stylist after hearing that she beat Yvette. He also revealed that Kimi told him that she chose Cloud Empire to train herself as a stylist.[25]

Nidhogg mentioned that Nikki may run into a gentleman-like soldier from Apple Federation in Moonlit City. Yvette cheerfully praised Orlando, but Nidhogg interrupted and had Yvette duel Nikki.[25] This soldier is later revealed to be Orlando, a friend of Kimi who was working with Nidhogg to investigate the apparent damage of the Iron Rose on Moonlit City.[26]

Nidhogg later prepared for the Fantasy Styling Contest with Yvette. Yvette asked him if it was okay for them to schedule a guard deployment meeting for the next day, and Nidhogg said he would handle it himself, granting her permission to go off and buy new clothes.[27] It is later revealed that Nidhogg and Royce believed that the Fantasy Styling Contest of 680 would be different: someone will try to cause trouble.[28]

Nidhogg oversaw the finals of the contest.[29] After Nikki and Sherry finished the first match, Nidhogg told Royce there was an intruder in the outside garden of Queen Nanari's palace. Royce was concerned over his sister's safety and left immediately, leaving Nidhogg in charge.[30]

After the second match, the people in the front row drew their swords, causing panic in the audience. Nidhogg disappeared.[31] Yvette sought him out, scared by the increasingly dangerous atmosphere, and Nidhogg took her along with him to escape after he realized that it would be quicker.[32]

They went to the North Kingdom via car, Yvette still confused as to Nidhogg's motivations and Nidhogg frustrated by her questions. She eventually realized what he had done and pleaded with him to go back, to which he reminded her that the North was his home, not Lilith.[33]

He kept Yvette in a room guarded by North Kingdom guards for several days, where she grew restless. She escaped by winning a styling battle against a guard.[34] Nidhogg approached her and reassured her that he was going to send her back the next day. Still upset, she asked him if he had been lying to her and Lilith the whole time. He easily admitted that he had, and that he had chosen her as his secretary in order to give himself a better image. However, he reassured her that he wouldn't hurt her, to thank her for her years of shielding him.[35]

The next morning, Nidhogg sent Yvette home with one of his trusted followers. Before she left, she formally accused him of violating several articles of Lilith and told him that the seven nations would arrest him. He just smiled and said that she ought to go before she cries again.[36]

Nidhogg united the previously fighting warlords of Mt. Till in the North Kingdom under a force known as League Till and began to move southward towards Cloud City.[37] Upon hearing about this, Lunar, as the city's chief designer, became determined to defend Cloud City and call for reinforcements.[38]

Upon arriving at Cloud City, Nidhogg gave the mayor of the city a letter intended for Lunar instead of attacking immediately. It read that he wanted to duel her, one on one, with the winner able to ask whatever they wanted from the loser. She decided to accept his challenge despite the mayor's distrust of him.[39]

Nidhogg engaged in a duel to the death with Lunar and fatally wounded her just as Nikki and her friends arrived.[40] This caused him to suffer from the Blood Curse that affects all citizens of Miraland.[41] As he paid respects to the late Lunar, Bobo asked him why he decided to start the war, but he refused to answer.[8]

When the group tried to convince Nikki to fight him, Nidhogg said that the peace brought about by the blood curse was a false peace. Bobo got angry at him, telling him that he benefited from the false peace too, because of his victory at Wintermount at the Designer's Tea Party all those years ago. Nidhogg gave Nikki the chance to compete with him.[8]

Nidhogg showed off the skill Dark Verdict in the battle, which reduced Nikki's score to only 10,000 points. Only after attempting to fight him over and over did the Iron Rose finally arrive and grant Nikki the Dawnblade, which impressed even Nidhogg. With this tool, he finally lost to Nikki, and removed his soldiers from Cloud City.[8]

Ozeca, an officer from the League Till Army, asked Nidhogg why he let Nikki and her friends go. He said it was his own business. She offered him the No. 7 Reagent, which can reduce his pain from the blood curse, but he declined it because he wanted to be aware of the suffering. Ozeca asked if they should contact "him", but Nidhogg said he would arrange it himself.[41]

Nidhogg hired Yvette as his secretary and kept her on despite her weakness both in styling battles and in the office, to the surprise of the people who worked with them. He is surprisingly patient with her, always taking her mistakes in stride and simply telling her what to do to fix the situation.[15] However, when she is upset he makes dry jokes at her expense.[17] He does not approve when she wears sexy clothing.[42]

It is clear he associates her strongly with bunnies,[43] which began all the way back in Yvette's first interview.[44]

Nidhogg chose her as his secretary because he believed her clumsiness would help him to build a better image, rather than because he actually thought she was a good secretary. After betraying the nation of Lilith and leaving the position of Prime Minister, he finally admitted this to her, but also promised not to hurt her as repayment for her years of serving this role.[35]

Ozeca is part of Nidhogg's army and she is loyal to him. The two share the belief that the blood curse provides a false peace.[40][45]

Though they grew up fighting alongside each other as allies, Nidhogg considers it is "fated" for he and Louie to be enemies. He views Louie as too idealistic, especially against his own perspective which he sees as more practical. However, he demonstrates a desire to sway Louie over to his own side.[14] When Ozeca offers to investigate Louie as an enemy, Nidhogg tells her not to and that Louie is "no big deal".[41]

Royce had some suspicions about Nidhogg's grim intentions before his rebellion against Lilith, but he didn't want him to find out that he didn't fully trust him. He felt that Nidhogg had always desired power, even when he was just a young man from the North Kingdom.[46]

The name Nidhogg is a reference to the dragon from Norse mythology called Níðhöggr, simplified as Nidhogg. The dragon forever gnaws at the root of the world tree Yggdrasil, which holds the cosmos together, and his actions are intended to damage and topple the world tree.[47]

Retrieved from "https://lovenikki.fandom.com/wiki/Nidhogg?oldid=110121"
Community content is available under CC-BY-SA unless otherwise noted.