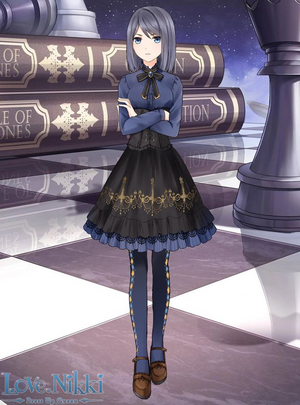 The sharpest sword of the Lord[1]
Little Kitten[2]

Neva is a character in Love Nikki. She works as Royce's guardian and his model, much to her reluctance.

Neva is a young woman of average height, with short black hair and light blue eyes. She's also quite pale-skinned, and never smiles.

Though Neva was given the powers of a Kindred when she was young, there is evidence that she is not the same as other Kindred. She was given the power via a ritual that involved only a drop of blood,[7] rather than being bitten by a Kindred (like Eternal Instant) or being born a Kindred (like Cesare). The ritual was also reversed by Royce.[8] Though Neva had the speed of a Kindred, she also suffered from the same limitations, including blurred vision and weakened abilities in the sunlight.[4]

Neva is extremely duty-bound and serious, offering a huge contrast with her boss Royce. She always tries to keep him in line and convince him to return to the capital, much to his annoyance.

Neva's parents were gamblers who were murdered when she was still a child. Neva went to the police to report what happened, but they didn't believe her. They found it ludicrous that someone would suffer the pain of the Blood Curse just to kill a couple gamblers, and instead proposed that maybe her parents had just run away to escape gambling debts. They told Neva that she should find someone to adopt her instead of wasting their time and demanded she leave.[7]

From then on, Neva was on her own. She had to resort to theft to survive and keep from going hungry, and ran away when she was at risk of getting caught. One day, she ran into a dark alley, and a mysterious figure known as the Lord embraced her. They recruited her as their assassin, asking her to be their sword. With nowhere else to turn, Neva accepted the offer, in hopes that she could stop living on her own and afraid.[7]

She became their sword, but failed utterly at normal things like etiquette lessons due to her nature. The Lord recognized this and encouraged her, but Neva insisted that she didn't need to see the light in life. Thus, the Lord prepared a ritual for Neva, and painted a magic formation on the ground with fresh blood. Neva walked inside, bare-footed, and the drop of Kindred blood used changed her: it brought to life the desire to kill within her. From then on, she had the power of Kindred within her, as well as the loyalty to the Lord.[7]

She was given a mission to invade a warehouse on the night of a blood moon, along with a crew of soldiers who also served the Lord.[9] It went wrong when Neva saw the moon and went into a frenzy for blood, attacking the soldiers that were meant to be working with her and protecting her.[10]

Though the Lord forgave her for the incident and the failed mission, Neva was sent into the palace and given a different task.[10] She was assigned by Queen Nanari to be the twelve-year-old Royce's bodyguard. She followed him around silently, to both his interest and confusion.[4] She was a quiet, unhappy child who wore all black. Due to the sunlight blurring her vision and making her feel weak, she stayed away from it as much as possible. She was only half Royce's age when this happened; about six years old.[4]

At some point, Neva also met the Heart Knight Eruka from the Royal Guard, and they became friends despite their differences.[11]

During Royce's travels throughout the Lilith Kingdom, Neva followed him in an attempt to get him to return to the royal palace, saying each time that it was her duty to protect him. However, he instead tried to strike deals with her instead of agreeing to return.[12]

Neva became quiet after Royce returned to Royal City with her to host the Fantasy Styling Contest.[13] During the contest, Nidhogg told Royce there was an intruder in the outside of the garden, and Neva and Royce went to investigate and check on Queen Nanari.[14] However, they found that Nanari was already gone when they got to her bedroom.[15] Following Royce's concern over Nanari's disappearance, Neva was sent to Cloud to investigate Nidhogg's intentions further. She met up with Nikki and her friends in Lor River City following Nidhogg's actions in Cloud City.[16]

Later, Neva met up with Noah, who took him into the Royal City of Lilith so that they could receive an assignment together.[17]

Neva asked the Lord for an assignment sometime later, wanting to prove herself. The Lord gave her the mission to break into the Royal Treasury and retrieve something; however, Neva was accompanied by many of the Lord's men on this mission. Not wanting to disobey the Lord's orders, Neva let them come with her.[10][1]

When Neva reached the treasury, she found that Royce was guarding it. She realized she had to make a decision between killing Royce and remaining loyal to the Lord, or breaking her contract with the Lord. She hesitated for the first time to complete her mission, but the blood contract she had made forced her to press her dagger against Royce's neck.[2]

However, when she remembered all the words and encouragement that Royce had given her, she lowered her dagger.[2] Unbeknownst to her, Royce had reversed the blood contract that Neva was under and freed her.[8] The soldiers that served the Lord immediately began to attack Royce and Neva once it became clear that she wasn't going to hurt him.[2] Royce summoned the secret army (presumably that of the royal family) to fight them off before taking the unconscious Neva to safety.[18]

Neva has served as his bodyguard for nearly her entire life, but they have very different lives and personalities. As a child, she never spoke to him, only followed him around.[4] In the year 680, Neva tries, usually in vain, to get him to follow his duty as royalty of Lilith Kingdom. Despite this, Royce does trust Neva fully and cares about her.[19]

As his bodyguard, she protects Royce with her life. In one incident when she had to defend him against attackers, she nearly collapsed after the ordeal was over. Royce stayed with her every day while she recovered. However, when he saw a scar down her back, he reflected on the fact that he didn't really know her at all. After this, he took her out into the sunshine to talk to her and ask her questions about her past, though she didn't always answer. She talks to him despite her hatred of the sunlight, telling herself that she was only talking to him because she was obligated to as his bodyguard.[4]

According to Royce, all of the items in her home are designed by him.[20]

Neva and Eruka are basically opposites, but the two get along quite well.[11]

Though the Lord saved Neva from the streets when she was a child, it was under the stipulation that she become their sword. When she was still very young, they performed the blood ritual on her that gave her the powers of a Kindred, but which also made her loyal to the Lord. This loyalty stayed with her for years to come.[7]

Note: Some of her text is cut off due to the size of the speech bubble.

Neva and Royce in Flowing Garden

Neva and Royce in Sea of Trees event 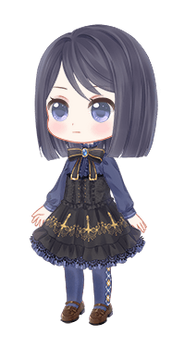 Neva's Basement
Add a photo to this gallery

Retrieved from "https://lovenikki.fandom.com/wiki/Neva?oldid=143748"
Community content is available under CC-BY-SA unless otherwise noted.