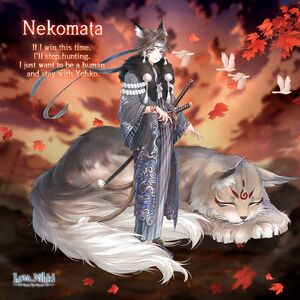 If I win this time, I'll stop hunting. I just want to be a human and stay with Yohko.

Nekomata is a Cloud suit that could be obtained from a Cumulative Recharge from November 15th to 24th, 2018, for at least 810

My brother was very strong. He always tells me 'I beat another bad guy today!'. That's so cool.
– Favorite Brother

At the moment, he smiled gently to me 'Live on' then died. I cannot understand, you said you wouldn't die!
– Way of Happiness


Humans came to me. They held my hand and thanked, 'You are a true warrior.'
– Human and Monster


But, after I met Yohko, I changed. Now I hunt so that I can stay together with Yohko.
– Future with Love


If I turn into a human, the yokai will hunt me down. So for our 'happiness', I'll turn Yohko into a yokai.
– Brother of the Cat


Why do I, as a yokai, kill yokai? It was my brother at the beginning, but now it's for my love.
– Resolution and Reason


The first yokai I killed was my brother. Before he was to be killed by humans, he asked me to kill him.
– Evidence of Monster


Rest assured. I won't die. I believed him and killed him before the humans.
– The Last Relic


He must have thought of everything. He always says 'Humans and Yokai can live peacefully together.'
– Afterlife Miss


I was accepted for killing yokai, but I have to go on killing. I'm a demon hunter now.
– Demon Cutter


I was hesitating. He helped me hold his blade, 'Be assured. Our blade can only kill humans.'
– Empty Stomach


Yokai and humans are so different. I once thought to become a human, a normal human...
– Demon Cat's Tail


Just use the blade to stab me… so that the human would think I'm dead.
– Demon Hunting


If I win this time, I'll stop hunting. I just want to be a human and stay with Yohko.
– Soft Demon Hunter

Retrieved from "https://lovenikki.fandom.com/wiki/Nekomata?oldid=161945"
Community content is available under CC-BY-SA unless otherwise noted.