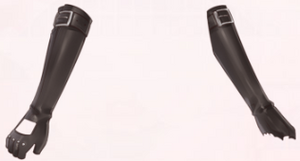 They are more powerful and useful than the army version. Anti-shark dye is contained inside the gloves. No kidding!

Navy Leather Gloves is part of the alternative version of the North Kingdom suit Army Major.

Retrieved from "https://lovenikki.fandom.com/wiki/Navy_Leather_Gloves?oldid=157618"
Community content is available under CC-BY-SA unless otherwise noted.