Mordosa is a city in North Kingdom. It is located nearby the royal city, Black Water City.[1]

There is a bar in Mordosa that is said to have an ethereal atmosphere. It serves butterbeer, and there is live saxophone music. According to Louie, who visits occasionally, the beer is terrible.[2]

Years before the year 680, there was a battle in Mordosa, which was bad enough to remain in the minds of those from North Kingdom to the present day.[3]

During the struggle for the crown, General Natalia, an anti-rebellion general from North Kingdom, occupied Mordosa in an attempt to undermine Duke Dimitry's power.[1] 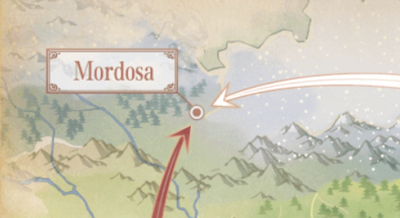