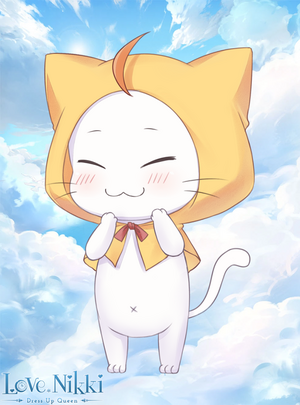 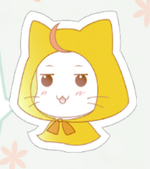 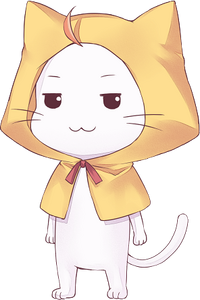 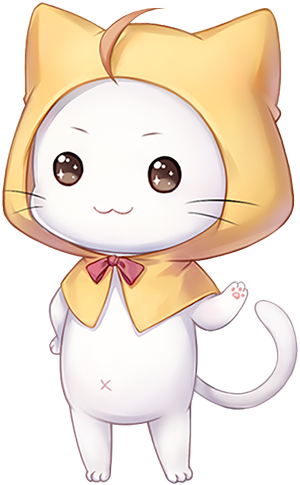 Momo is one of the main characters of the series and a friend of Nikki's who assists her in her fashion endeavors. He is a small, fat, and sarcastic cat obsessed with grilled fish.

Momo is a white cat with a sarcastic expression and a slightly pudgy belly. He has a single lock of light brown hair and wears a gold hood held with a red bow.

It's stated by Nikki that although Momo has the form of a talking cat, he isn't really a cat. Instead, she describes him as "this yellow-cape-wearing, fat... Momo".[24][25]

Momo is generally nice, but like most cats Momo can be sassy and a bit greedy when it comes to his food[26] or his pride. He is helpful and prideful, but the type to bluntly point out the fault in others. He also makes many comments on the beauty of the girls around him.[27][28]

Momo's family, especially his great-great grandfather, seemed to have knowledge of Miraland, though Momo didn't seem to believe it himself until he saw it for the first time.[15]

Momo has designed the following:

Momo's Adventure
(in a video game)

Xmas Star
Add a photo to this gallery

Nikki and Momo are close friends. He can be quite teasing towards her, and he makes fun of her mercilessly when she tries to design clothing.[30] However, he follows her through thick and thin and always helps her with her styling.

When she left the group, he was very upset, crying over the letter she left. When Kimi questioned Bobo's motives, he defended her fiercely, saying that her reactions were genuine and she could not possibly be bad.[37]

Momo holds Lunar in high regard, calling her a goddess. Like with many other women, he had a small crush on her as well.[38] He loved it when her mirror self in the Flower Field called him "Kitten".[39] He also loved her cooking.[40]

Retrieved from "https://lovenikki.fandom.com/wiki/Momo?oldid=171236"
Community content is available under CC-BY-SA unless otherwise noted.