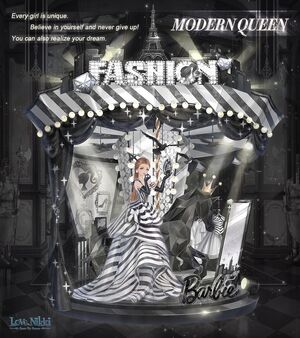 Every girl is unique. Believe in yourself and never give up! You can also realize your dream.

Master of Destiny
Fearless of True Self
35

Modern Queen is an Apple suit that appeared in the second season of the Barbie Event. It was created as a collaboration with Barbie. It has been confirmed that this suit will not return.[1]

Completion Prize: A Styling Gift Box containing Master of Destiny, Fearless of True Self, and 35

Barbie had followed the path that her parents set for her until one day she watched a street fashion show.
– Fashion Enlightenment

The match of those simple clothes turned out to be magically charming. Since then, Barbie dreamt to be a stylist.
– Dream Chaser

That's the first time Barbie clearly knew what she wanted. That's to be a fashion editor.
– Future Plan

Barbie, seated in a limo, looked at the night views of the bustling city with flickering neon lights.
– Neon Light

'You need to learn to take over the family business.' That's what Barbie has always been told since young.
– Modern Times

Every girl is unique. Believe in yourself and never give up! You can also realize your dream.
– Dream Coming True

Barbie chose to make a living by herself instead of depending on her family but the journey to dream is not smooth.
– Journey to Dream

With a strong will, Barbie finally realized her dream. Setbacks and failures were just embellishments to her glory.
– For the Glory

In pursuit of her dream, Barbie went through countless setbacks but never has she thought of giving up.
– Pursuit of Dream

Barbie showed up at a splendid show. When the spotlight shone on her face, a confident smile could always be seen.
– Magnificent Show

Looking at the mirror, Barbie finally found her true self, the fashion queen in Miraland.
– True Self

Barbie left home and was warned that if she didn't give up her dream, she would never be allowed to come back.
– Rebellion

It's confidence and persistence that make Barbie realize her dream of becoming a real fashion queen.
– Fashion Queen

Looking around the dazzling city, Barbie feels so determined and confident that her future is in her hands.
– Master of Destiny

Instead of living up to others' expectations, Barbie finally chooses to step on her self-realizing journey.
– Fearless of True Self 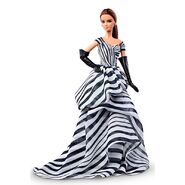 Retrieved from "https://lovenikki.fandom.com/wiki/Modern_Queen?oldid=124868"
Community content is available under CC-BY-SA unless otherwise noted.