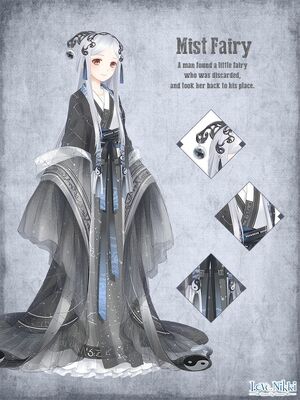 A man found a little fairy who was discarded, and took her back to his place.

Mist Fairy is a Cloud suit that can be obtained through evolution of its parts bought in in the Association Store. It can also be customized.

On the mountain Tai Chi, there is a stone placed by Mist Fairy in memory of her senior ages ago.
– Mist Fairy

On the stone carved the stories she shared with her senior. And the stone is called stone of love.
– Unreal

Since when did the story of stone begin, nobody knows.
– Unreal-Rare

'Bai Jinjin, lovers pray in front of this stone will be blessed.' 'Fool. We won't separate anyway.'
– Diversity Jadestone

Not long before I was born, I was deserted. It's senior who picked me and took me back to temple.
– Mist Fairy-Yin

When I was 7, senior took me to see the fair. I was blamed by master later, but I feel so happy.
– Unreal-Yin

When I was 15, I made a parcel for the senior. However, the master foe came to seek revenge.
– Accident in Fate-Yin

The master led all disciples to fight the foes. Senior hid me in a big jar back in the yard.
– Final Shot-Yin

On the second night, in thirst and hunger, I came out but to find the court has been burnt.
– Diversity Jadestone-Yin

I came to this temple when I was 3, and I found and baby some day morning.
– Mist Fairy-Yang

The girl was so clever during training, making master also very happy.
– Unreal-Yang

As years pass by, the little baby became a beautiful girl. How could you imagine that?
– Accident in Fate-Yang

The foes came that day, I can do nothing but to hide her in the yard. I cannot tell her I'm a spy.
– Final Shot-Yang

I told those guys the back yard is clear. Then I found a corpse and put it on my clothes.
– Diversity Jadestone-Yang

The descriptions from the suit and its recolor tell a single story from two different persons' points of view.

In the original suit, the narrator is a girl who was abandoned shortly after her birth, but a slightly older boy whom she refers to as "Senior" finds her, and the temple's Master takes her in with the other disciples. When the girl is 15, the temple is attacked by the Master's foes. Senior hides her in a huge clay jar in the yard. She spends two days hiding there and, when she decides to leave, she finds herself the sole survivor of the group.

The recolored suit's story is from the Senior's perspective. As a little boy he finds the protagonist and they're raised together, becoming very close friends. It turns out that Senior is a spy from a rival group, but he still wants his friend (and apparent love) to survive so he hides her in the jar and then dresses up a corpse with his own clothes, going missing from then on.

The unevolved versions explain that the girl, now called Mist Fairy, went to Mount Tai Chi and placed an elaborately carved stone called the Valentine Stele[1] with all of the memories she spent together with her senior. From then on, people were unsure of the stone's origin, but believed that lovers that prayed in front of the stone would be blessed. Bai Jinjin later visited it, and when she heard the legend behind the stone, she scoffed at it, saying that she and Zhong Lizi wouldn't be separated no matter what they did.

Lunar and Fu Su later went to the mountain to meet the owner of the temple there, who could assist her with crafting the Stringless Guqin.[1]

The suit and its customized version

Retrieved from "https://lovenikki.fandom.com/wiki/Mist_Fairy?oldid=137149"
Community content is available under CC-BY-SA unless otherwise noted.