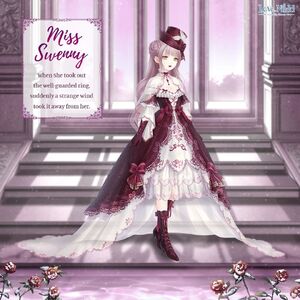 When she took out the well-guarded ring, suddenly a strange wind took it away from her.

Miss Swenny is a Pigeon suit that could be obtained through Evolution of items from Volume 2, Chapter 3.

Strange story was discussed in slum: anonymous help to the poor is carried out, but only fragrance remains.
– Epiphyllum Story


Swenny handed out candies to kids and listened to those miracles they described, smiling mysteriously.
– Orange Wine


No more lord statue of gold and gems can be found in the city. Nightingale flies in the sky, singing beautifully.
– Oriole Chirp


A sly man pretended to be sick and stayed at the decaying house for a night, yet he got nothing but a real cold.
– Bell of Prayer

Bored with the flower garden and grass maze, Lady Swenny of Earl Symanvil is having another boring day.
– Epiphyllum Story - Rare


The heroic story of the phantom thief sounds much more interesting than the afternoon tea.
– Cypress Vine - Rare


The ferocious watchdog is now eating a delicious sausage. Miss Swenny returns with a heavy sack of money.
– Covered by Red Moon - Rare


By eavesdropping, Swenny knew who was in need. She bought bread and paid the medical fee for the sick kid.
– Oriole Chirp - Rare


A dignified lady in the daytime, a phantom thief in the night. Miss Swenny is fully devoted to the game.
– Bell of Prayer - Rare

The mean aristocrat got a diamond ring recently. Swenny made the plan before she attended the banquet.
– Epiphyllum Story - Epic


A treasure always attracts attention. As Miss Swenny takes out the ring, a strange wind blows and it's gone!
– Cypress Vine - Epic


After 0.5 seconds of flurry, Miss Swenny runs to where the wind blows. Under the moonlight, the curtain is waving.
– Orange Wine - Epic


A gentleman in silver mask tossed something to Swenny, and when she tried to defend, he jumped off the balcony.
– Covered by Red Moon - Epic


Unexpectedly, it is soft and smells familiar. Miss Swenny recalls his blue eyes as she looks at the orange flower
– Oriole Chirp - Epic


The helpful phantom thief missed for the first time. But, it's not the end. Things are getting more interesting!
– Bell of Prayer - Epic

The base descriptions of the suit reveal that a mysterious benefactor was anonymously helping the poor. Though food was being distributed to the hungry and doctors were visiting the sick, there was no trace but a perfume of whoever was making these miracles happen. At the same time, a gold statue of a lord went missing. Though one man tried to investigate by going undercover as a sick person, the only thing he got was a real cold.

The rare descriptions of the suit reveal that it is actually Miss Swenny who was helping those people. Bored of her life of teas and gardens, she made black ninja clothes for herself and wore her orange perfume as her disguise. She knows all the tricks, like feeding a sausage to the guard dog so that she could get inside and steal money. With the money, she bought bread and paid medical fees to help those in need, and she found out who to help by eavesdropping. With all of these activities being carried out at night, Miss Swenny was devoted to her life of helping people as a phantom thief.

The epic descriptions reveal that Swenny found out a mean aristocrat got a diamond ring, and she made plans to steal it before attending an upcoming banquet. As she took the ring, a strange wind blew it out of her hands. Quickly, she ran after it and found a waving curtain in the moonlight. It was then when a man in a silver mask tossed something to her: a soft, familiar-smelling orange flower. Though it was the first time she wasn't able to successfully steal something, she remembered his blue eyes and realized that things were getting more interesting.

The presence of a gentleman in a silver mask and blue eyes indicates that the man she met was Mr. Sapphires, who is also a phantom thief from a rich family. It is likely that he thwarted her because he was also planning to steal the aristocrat's diamond ring.

Retrieved from "https://lovenikki.fandom.com/wiki/Miss_Swenny?oldid=160680"
Community content is available under CC-BY-SA unless otherwise noted.