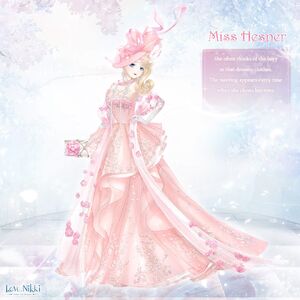 She often thinks of the fairy in that dreamy clothes. The meeting appears every time when she closes her eyes.

Miss Hesper is an Apple suit that appeared in the Ring Fantasy Event.

The renowned designer Lady Hesper was once an orphan. Still, the world is full of hope to her.
– Golden Glory

The long childhood time is full of setbacks and hardships. She desires that one day she will shine her own light.
– Diamond Future

She often thinks of the fairy in that dreamy clothes. The meeting appears every time when she closes her eyes.
– Fairy in Dream

That night, she looks into the sky and prays to the shooting star. The ring shines as she wishes.
– Sweet Future

The fairy sleeping in the ring heard her and woke up. Fairy's lucid wings hover as she talks about her dream.
– Glorious Chapter

She made a promise with the fairy under the starry sky. Once she passed the challenge, she would realize her dream.
– Star's Company

Based on the guidance of the fairy, she became an apprentice of a jewelry shop. The gems are like stars in her eyes.
– Hope Blossom

The forgotten jewel shines tempting halo on the counter, but Hesper kept it carefully until the master came back.
– Pure Faith

Searing flame makes her sweat, but she doesn't even know. She carefully embeds a gem on the ring.
– Rose Reverie

She was beaten to dust and cried in despair, but the heart of innocence never faded. From misery the flower blooms.
– Purest Heart

She seeks the light of life in the dark, never stops, until the wishes in her heart were lit.
– Rosy Shadow

No matter how long and thorny the road to dream is. Her faith never fades and guides her forward.
– Crystal Heart

Retrieved from "https://lovenikki.fandom.com/wiki/Miss_Hesper?oldid=147289"
Community content is available under CC-BY-SA unless otherwise noted.