The event Yokai World revolves around an annual tradition where yokai come together and fight each other.

In Love Nikki, yokai can either be born as yokai or be converted from a particularly evil human.

The character represented by the Hellish Bloom suit was born as a yokai.[1] She believes that yokai are a force for good and that humans are fools, and does not believe that yokai and humans can coexist - however, she does not dislike the idea of fighting them. The exception to her beliefs is the Yokai Hunter, a mysterious individual who both hunts and is a yokai, and whose face has never been seen by any yokai who lived to tell the tale. She defends her friends, refusing to let the Yokai Hunter harm them.

Bloom takes part in the Yokai World event for her own amusement, stating that if she wins she will pray for the death of the Yokai Hunter. She gained the nickname 'Hellish Bloom' from humans witnessing her in battle.

Nekomata is a nekomata yokai.[2] His brother was also a yokai, who believed that humans could coexist with yokai. Hellish Bloom warned Nekomata that this belief was foolish, looking down on him for never attacking humans when they attacked his friends and brother.

Eventually, Nekomata's brother was hunted by humans for something he had done. Knowing that he would be killed, he tricked Nekomata into killing him. He gave Nekomata a knife that he claimed could only harm humans, and Nekomata fell for the trick, killing his brother. Though the humans thanked Nekomata and welcomed him into the community as their protector, he could not understand why his brother had deceived him. He eventually stopped believing in his brother's wish for peace between yokai and humans.

Nekomata was, at some point, saved in the mountains by the kitsune yokai[3] Yoco, who fell in love with him. Yoco could only tell him her name before he left. Yoco vowed to find him again and marry him. However, Nekomata fell in love with a human girl named Yohko. Neither realised that he was a yokai, let alone the Yokai Hunter, at first.

Nekomata turned from killing yokai to protect the village to doing so for Yohko's safety. Neither believed that yokai and humans could live together peacefully. Nekomata refused to turn into a human to join Yohko as he feared that the yokai would hunt him down and kill him in such a weak body. However, Yohko refused to let him turn her into a yokai as she was unsure if she would still love him if he did so.

Nekomata eventually joined in with the Yokai World event. He stated that, if he were to win, he would give up hunting yokai, turn into a human and live with Yohko.

Yoco, believing that Nekomata had mistaken Yohko for her, tied up Yohko and hid her in the mountains, taking her place in a human disguise that nobody could see through. She agreed that, if Nekomata could recognise her, she would free Yohko. However, Nekomata revealed that he had known the difference all along, claiming that he dated Yohko to get to Yoco. Yoco fell for this claim, marrying Nekomata and freeing Yohko. It is implied that she falls into Nekomata's trap and that he later kills her, as he has done with every other yokai.

The character represented by Pragya Princess was a human. She fell in love with the human Kasahara, who was turned into a karakasa-obake.[4] Even when Kasahara became a yokai, he retained his kindness, helping people find their way back home from forests and refraining from doing evil. To prevent humans from harming him, she let her village sacrifice her. She became a hannya[5] (Pragya), a yokai who hates her human past and humans. She entered the Yokai World event to collect the souls of demons so that she could turn Kasahara back into a human, believing that yokai and humans can still love each other. 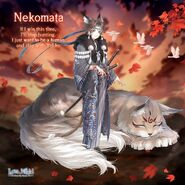 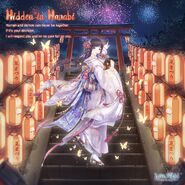