Love Nikki-Dress UP Queen! Wiki
Register
Don't have an account?
Sign In
Advertisement
in: Plot, Night of Starfall, Minor Subplots

The event Night of Starfall revolves around a band summoned by the Greenfield Tower (also known as the Ash Tower) to spread hope, peace and love to the world after falling into the Abyss, a place akin to Limbo.

Rubbit, a waking soul from the mist of the Abyss, had found a way to transcend the barrier of life and death. Ignoring the noise from behind, she descended to Miraland and met Luciter, whose music had "a familiar abyss breath". She had found her purpose in life. When Luciter's performance ended, she packed her bag and left without a word, ignoring Rubbit despite being her only listener. However, Rubbit approached Luciter, saying "Well... I listened to you the whole afternoon. We are friends now? I'm Rubbit, and you?" and as for Luciter, she was deeply attracted to her. Luciter had a dark past, carrying her family's misery since her birth, but strove to find out the truth through music. The reason why she composed songs was because there is always an opposite side to justice.

In the moment Luciter doubted the herself, Rubbit had appeared. She convinced Luciter to change her songs, and while Luciter was very reluctant (and from Rubbit's point of view, aloof) at first, her songs often became richer. Their performances on the streets became their finest memories. She taught Rubbit how to play the guitar, and when Rubbit played her renewed songs, Luciter realized what her songs lacked—hope. The Nine-Day War had caused unrest in Miraland, and that was where Luciter drew inspiration from, thanks to Rubbit.

Eventually the two formed a band with two others, namely Norrin and Edvina. It is notable that Norrin was a victim, having lost everything she cherished from a war—presumably from the Nine-Day War—and wished for peace. Edvina was an AI longing for freedom, and was granted that from Norrin as well as music which she treasured greatly.

When the band was officially established, Luciter bestowed Rubbit her precious guitar, taking the role as drummer instead. The influence of the Nine-Day War is described on Luciter's drums. For Rubbit, the days were busy but fulfilling; everyday they thought about how to spread their songs and ideas of the band. They were very excited.

It is very likely that their last performance was in the Greenfield Tower, Luciter and Edvina describes a familiarity to it, drawing parallells to their later death and rebirth. Although Rubbit felt strange about the scenes, she shrugged it off, thinking everything would be fine with Luciter and the familiar melody around. Somehow however, the stage caught on fire, burning the band down. Rubbit clung to Luciter and fell to the Abyss, believing she could protect her there, even though Rubbit could sense Luciter's dissatisfaction of their unfinished performance.

When Hecate—Keeper of the Abyss—accidentally lost her staff in Miraland, the Greenfield Tower was brought back, summoning ghosts from time rifts. The band was resurrected to perform one last time, spreading hope, peace and love to the world. Though Rubbit held Luciter tightly as they moved from the mortal world to the Abyss, Luciter remembered. A red light flickered in the dark red background, which then returned after the first drum beat.

Norrin told Edvina not to feel sad and not to feel regret, for their message would last forever. Norrin describes "the winner" being able to wipe them out brazenly, but they can not prevent her from singing. It is likely that Hecate was their enemy, being the gatekeeper. The stage was once again lit on fire, but according to Luciter, it would no longer devour them again. Luciter comments that "The Final Fire" will be ignited, and afterwards, winter would come and bury everything in snow. 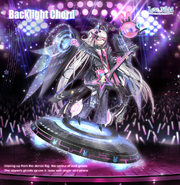