Art of War describes war caused by divine gods in Cloud Empire. This page focuses on the mythological history behind the main story's happenings. Some lore from the Azure's Messenger Event is also explained here. To read the main story, please refer to Art of War Event/Story.

The story of the gods starts with Bixiao, the embodiment of peace and hope for humans. She has a little sister named Chixiao, who she loves dearly. Despite Chixiao having an "unparalleled" smile—as Bixiao describes—she is actually the embodiment of war. The two are responsible for guarding the sky and observing the ground, each of them being in charge for half the time of the day. Bixiao let Chixiao take the nighttime, as she loves the tranquility of night and the mystery of darkness, leaving daytime to herself. However, because day and night never appear together, they rarely saw each other, only able to meet half a day when an eclipse happened. Bixiao thought it was kind of selfish of her to look forward to it, as eclipses were a sign of ill omen for the mortals.

However, before the eclipse, Bixiao noticed how the humans changed, who seemed to grow tired of peace. War started to escalate out of control, and Bixiao grew worried, wondering if Chixiao was aware of it. And finally, having not met each other in a long time, the eclipse befell. Bixiao rushed to Chixiao, wanting to inquire about the wars but more importantly, how much she missed her. Chixiao had missed her too and the two embraced each other, but Bixiao could sense that something was wrong. Chixiao complained about the boring days and Bixiao comforted her with a smile, but the words after shocked her: "Sister, have you ever tasted war?" She had a blissful expression that freaked Bixiao out. "That's amazing! I can't live without war now. Life has never been so much fun!" She then caused a violent eruption that shook the ground, which made her laugh maniacally. Bixiao burst into tears and persuaded her to stop, which made Chixiao unhappy, pushing Bixiao off so strongly that Bixiao knocked into a pillar, coughing blood while lying on the ground. Chixiao's power was so strong that it tore Bixiao's body in 4 wills of fight: the Wind (Feng), the Forest (Lin), the Fire (Huo) and the Mountain (Shan). She realized that even she possessed a maniacal thirst for war, and that she had to stop war with war.

Both of Chixiao's nature and strength had awakened, and conversely, a power to stop Chixiao's outrage had been prepared beforehand. The most logical solution would be to take Chixiao's consciousness directly, making her body fade away, but Bixiao could not do that because she loved her. Instead she opted to risk the world to subdue her, convincing herself that maybe Chixiao was just playful like she always was, and that things would be okay if she was patient.

Thus began a cycle: whenever Chixiao caused war, Bixiao would be there to stop her. She deployed a magic circle in the clouds and later sealed Chixiao in it with her 4 avatars, but she didn't leave her alone. Beside her bed, she sealed herself too.

Chixiao had woken up early afterwards when the whole land was covered by war and a "mysterious curse". It is possible that the mysterious curse is the blood curse of Miraland. A farsighted emperor woke Bixiao up, and once again she sealed Chixiao on the clouds. As a token of gratitude, Bixiao made a deal with him. As long as he or his descendants summon her with their blood when wars spread over the land, she would befall again and stop it. And thus she fell asleep again, hoping that maybe many years later, both of the sisters would wake up at the same time and enjoy the beauty of the world until the end of time. 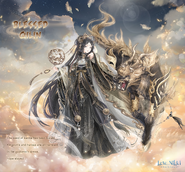 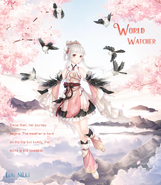