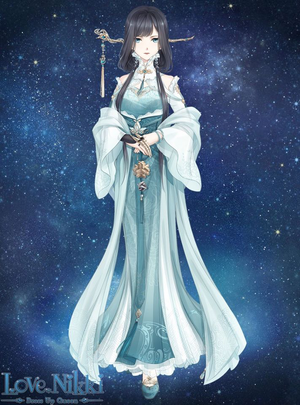 Head of the Ming Clan

Ming Shuiyuan is a character in Love Nikki. She is the head of the Ming Clan, one of the Four Clans of Cloud.

Ming Shuiyuan has a mature appearance, with even, neat black hair separated into two twin tails, and light blue eyes. She wears a beautiful dress with shades of blue, a blue bracelet in her left wrist, and blue shoes.

Despite the hardships she has been through, Ming Shuiyuan is brave and level-headed. However, she is also antisocial, soft spoken and taciturn, and she has always preferred solitude over spending time with others.

Even as a child, Ming Shuiyuan was a skilled inventor, and was recognized by her family for her talent in creating mechanisms. However, to Ming Shuiyuan, mechanisms were simple compared to understanding humans. She created a mechanical tortoise, which she considered her first friend. Even the tortoise got lonely, though, due to her habit of getting caught up in inventing, so she made it a mechanical turtle as a playmate.[10]

The head of the Ming clan requested that Ming Shuiyuan go to Southern Cloud to create a vault for the Phoenix clan, another of the four houses. She was confronted with a world totally unlike her home in the workshop of Northern Cloud, and had to socialize with the new head of the Phoenix clan, Zhu Yuxian. She found him, like most people, very confusing: sometimes he joked around a lot, while sometimes he would simply sit quietly and play the guqin. However, because he was so confusing to her, she couldn't resist the urge to see him.[10]

While she was there, Zhu Yuxian offered her a kite, and Ming Shuiyuan noticed he had injured his finger. She realized he had made it himself, and quickly accepted the gift. Though it couldn't fly even when the wind was good, she kept it in a corner of her room.[11] She also created a sword for him, which he kept hidden in his flute.[12]

Ming Shuiyuan's vault for the Phoenix clan, Mansion Voyage Moon, was accepted, and she was chosen to become the next head of the Ming clan. The night before she returned to Northern Cloud, she simply sat together with Zhu Yuxian as he played his guqin, and they didn't exchange a word. Even though she returned to Northern Cloud, he had changed her perspective on life, and she began to also learn to design clothing.[10]

Ming Shuiyuan did not see Zhu Yuxian for five more years, until the ceremony of the Ming clan head, and when she did they simply greeted each other in their roles of clan heads. However, after the ceremony, a maid brought over a box holding a compass that Zhu Yuxian had left. Ming Shuiyuan took it and put it in the depths of her drawer, next to the tortoise she'd made.[10]

Another clan, called the Zhan clan, rose to power quickly in Northern Cloud, which threatened the success of Ming's own clan.[5] They sent her an invitation to attend the inauguration of their new master, along with everybody else who held power in Cloud Empire. Though Ming Shuiyuan believed it was a trap, she felt that if she attended, she could find out what was going on with the Zhan clan.[13]

When she attended the inauguration, she found out that the new clan leader, Zhan Qiuming, held a number of similarities with Zhu Yuxian, which she remembered from their time spent together. Zhan Qiuming played familiar guqin music and he had the same scar on his finger that Ming Shuiyuan remembered from when he had made her a kite.[6][11] She attempted to speak to Zhan Qiuming multiple times to discern the truth, though he insisted on dancing with her instead of having a conversation.[11] Frustrated, she finally managed to get him alone, and after he admitted he was Zhu Yuxian, he offered to meet up with her later that night so that they could speak privately.[14]

She brought her mechanical Xuanwu with her and kept it partially hidden in the forest, though it did not go unnoticed by Zhu Yuxian.[15] He offered her the same type of tea he had noticed she disliked nine years before; this time, when he noticed she disliked it, he told her it was too late to change it.[16] When Ming Shuiyuan asked why he was sabotaging her clan by joining the Zhan clan, he told her that he disagreed with the way Cloud Empire was headed and wanted to take it over. He went on to suggest that she should join him, with the caveat that if she didn't, and the Cloud Empire fell, then her clan would fall as well.[15]

Completely shocked at what she was hearing, Ming Shuiyuan told him that he wasn't the Zhu Yuxian she knew.[15] She went on to state that she would not oppose the Cloud Empire or accept help from him. She got up to leave, and Zhu Yuxian sent a torrent of needles her way, which her mecha Xuanwu blocked for her. When the siege stopped and her Xuanwu retreated, he took out his flute, which had a sword hidden within it - the sword Ming Shuiyuan made for him years ago. He stabbed her with it, and she fell to the ground with a cry.[12] Unable to move and bleeding out, she told him that her clan and the Yue and Bai clans would fight till the last man, and Zhu Yuxian said it was a pity she would not see that day. Intending to kill her, he raised his sword again, but hesitated.[17]

In that moment of hesitation, Xiao Zong appeared, brandishing his sword and drinking. He told Zhu Yuxian that the reason he couldn't kill her was because he still had doubts. He then declared that "the game" would be more interesting with Ming Shuiyuan alive, taking her unconscious body away and leaving Zhu Yuxian in the forest.[17]

Xiao Zong talked with her for a long time after that. In the coming days, it was hard for her to accept that she had actually been stabbed except for when she was actually cleaning her wounds.[8]

At some point after that, Ming Shuiyuan used a mech army to capture the thirteen rebelling cities in South Cloud which had caused the Phoenix clan's downfall.[18]

One night around New Year's, Ming Shuiyuan woke up with a start, drenched in cold sweat, after having a nightmare that she was being stabbed by Zhu Yuxian. She assembled the Xuanwu, and headed to Snowfall Hills in Brocade City, where Yue Qianshuang was wrapped in chains, unconscious and dying. Using her mecha, she released Yue Qianshuang from the chains and put her on the ground, leaving her without a word.[8]

It is evident that Ming Shuiyuan greatly cares for Yue Qianshuang. She rescued her on New Year's Eve while she was dying by using her Xuanwu mecha to cut the chains off of Qianshuang.

The two share a deep but complicated relationship. Zhu Yuxian transformed Ming Shuiyuan's perspective on life, and was the first person she truly became close to. They both had feelings for each other. However, when she refused to join him in taking over Cloud, he betrayed her trust and stabbed her,[12] and due to this she had nightmares about him.

However, even though many things happened, Ming Shuiyuan continues to hold vivid memories of their time together. Using those memories, she traveled deep into the ruins of Mansion Voyage Moon to search for the warmth that Zhu Yuxian once kept deep in his heart.[19]

On the other hand, Zhu Yuxian wanted her to join his side in taking over Cloud. Even though she refused, he still wished she would join him, and feels that despite her stubbornness, there's still an opportunity to persuade her.[20]

Retrieved from "https://lovenikki.fandom.com/wiki/Ming_Shuiyuan?oldid=145100"
Community content is available under CC-BY-SA unless otherwise noted.