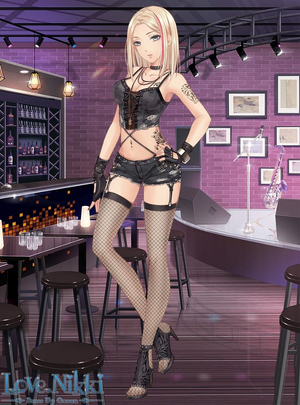 Mela is a character in Love Nikki. She is a member of the Iron Rose Stylist Legion, a group of talented and notorious stylists from the Pigeon Kingdom.

Mela is a prideful, fearless young woman who takes no crap from anyone and is quite a jerk to those who displease her. She is also fiercely loyal to Queen Elle and takes her position in the Iron Rose Legion seriously. She is seen handling different shady works like stealing designs,[5] robbing stores,[6] or giving support to people that Elle considers worth of her aid.[7]

However, it's shown that she also has a soft side. At a singing competition in the Pigeon Forest, Mela decided to join. To the entire Iron Roses' surprise, she had a lovely singing voice, so beautiful that elves appeared in the clearing and began to sing along.[8]

Mela targeted Lunar's design for the Stringless Guqin in this year, and only gave it up once Nikki defeated her in a styling battle. However, she threatened Nikki and her group with the wrath of the Iron Rose and told them that one day they would pay.[5]

Mela targeted Lunar's family's fabric shop in Moonlit City, Cloud. Mela had robbed the Silk Shop in an attempt to gain the spices used to make Cloud Calico, and the spices were all nearly gone by the time Nikki and her friends got there.[6] However, the Mayor of Moonlit City had only pretended to cooperate with Mela, and instead she, Lunar, and Lunar's mother cooperated in order to hide all of Moonlit City's valuable treasures and deceive Mela.[9]

Mela also attended the Fantasy Styling Contest with Sherry, where they just narrowly escaped before Nidhogg's rebellion threw the event into chaos.[10] She also helped assist Sherry and Ransa in Cloud City, where Elle had ordered them to bring Nikki the Dawnblade.[7]

Mela and Ransa bicker with each other, especially about their duties within the Iron Rose. While on their way to Cloud City, Mela insinuates that Ransa wasn't smart enough to succeed at her mission in Pota, while Ransa accuses Mela of never completing one of Elle's tasks even once. Later, while Mela looked over the city, Ransa told her to stop "wasting time enjoying the battle" and to actually find Nikki so that they could help her. Sherry seemed tired of their bickering, telling them to shut up or just sitting in resigned silence.[7]

Though they are part of the Iron Rose Stylist Legion together, Mela likes to bully Debbie, especially about how she is a bookworm.[11][12]

Retrieved from "https://lovenikki.fandom.com/wiki/Mela?oldid=104891"
Community content is available under CC-BY-SA unless otherwise noted.