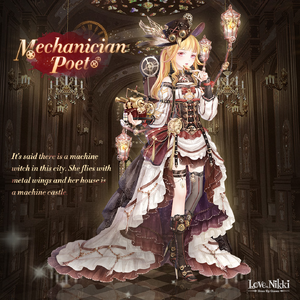 By the mini aircraft, the mechanician poet flies to the next position, the capital of steam.
– Golden Flame

Ginny flies around Pigeon Empire, collecting all the old poems and stories as her materials for writing.
– Gear Star Map

Walking in the alleys, Ginny feels she's been tailed. She secretly turns a gear and releases a droit watcher.
– Beat of Bond

But her contraption is instantly discovered. The walls shift dramatically into a machine maze, trapping her inside.
– Chain City

But Ginny is prepared. She throws the hat into the air, which turns into a hawk searching for the power core.
– Hawk Vision

Not once has she seen such a scene. Ginny adjusts her perception to follow the constantly changing environment.
– Fourth Dimension

The whole zone vanishes as Ginny escapes. It turns out to be a kernel-size machine. It feels so unreal.
– Steam Dream

The more complicated a machine is, the more weak points it will have. Ginny searches. It's a race of time.
– Perpetual Motion

The dazzling snow blinds her. After she gets used to it, the world has been changed by the collapse's aftershock.
– Polar Light

'She keeps all the secrets in her box. People devote their whole lives, but cannot get a glimpse of truth.'
– Mechanician Poet

The suit is about Ginny, a poet who spends her time flying around Pigeon collecting works for inspiration.

The machine witch mentioned to live in the same city likely refers to Celine, the character featured in Age of Steam, who is described as the "Mech Witch" and lives in a shiny metal aircraft. 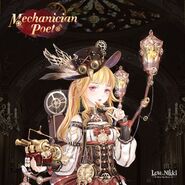 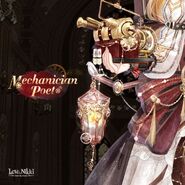 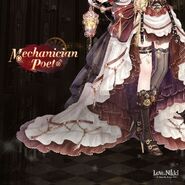 Retrieved from "https://lovenikki.fandom.com/wiki/Mechanician_Poet?oldid=148027"
Community content is available under CC-BY-SA unless otherwise noted.