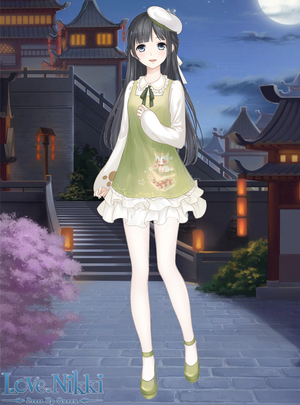 The Mayor is a small, unassuming girl with long black hair wearing a childlike green-and-white dress with paw-prints on the sleeves. She has a white cap on her head and matching green shoes.

The Mayor acts young and immature, but is secretly sneaky and conniving. When she was young, she would sneak out of the house with her sister in order to avoid the work set to her by her father, and to catch fireflies at night.[2] This habit continues once she becomes Mayor, sneaking away to other cities to have fun and escape work.[1]

She has always been very kind and generous to the people of Moonlit City.[4] She also loves pets and small animals.[8]

Xie Guizhou grew up as a boy, alongside one older sister named Xie Lisheng, and was trained to become Mayor from a young age. Xie Guizhou found Mayor training boring, and would often sneak out to watch Xie Lisheng dance and catch fireflies with her. One night while doing just that, Xie Guizhou confessed to having a secret desire to dance like her, since she looked so happy when she did. At her encouragement, Xie Guizhou danced for her, clumsy but vigorous.[2]

However, on that night, Xie Lisheng collapsed. The family discovered that she had an incurable heart disease, and she was advised to rest, meaning she couldn't dance anymore. Xie Guizhou did everything possible to cheer up Xie Lisheng, but she always wore a sad look on her face.[2]

When the mid-autumn festival rolled around, Xie Guizhou convinced her to leave so they could attend together like every year. Xie Guizhou carried her all the way to the river and set her down before performing her prayer dance for her. Xie Lisheng was moved to tears by this. At the end of the year, Xie Guizhou took her place and performed the dance at the ceremony, finally bringing Xie Lisheng happiness.[2]

After Xie Lisheng passed away, Xie Guizhou began to wear female clothing, and shouldered her wishes by becoming a dancer while balancing it with being Mayor. Many of the palace elders mistook Xie Guizhou for Lisheng, but Guizhou did not bother to correct them, and Xie Guizhou's story was considered an open secret.[9]

The Mayor was always regarded as kind and good by the people of Moonlit City, and was loved and respected in turn. She gave away clothing materials and supplies to the people there.[4]

In this year, Queen Elle sent Mela, a member of the Iron Rose, to Moonlit City, asking for the Mayor's cooperation in helping them steal materials and designs from the people of the city. The Mayor pretended to accept, but instead came up with a secret plan with Lunar's mother to trick the Iron Rose. They prepared fake spices and common designs as bait while hiding the real treasures.[6]

However, the Mayor's actions caused the people of the city to suspect her.[4] Orlando and Nikki both went to investigate the Mayor at the same time. On their way in, the Mayor met Nikki and her friends just outside Moonlit City, pretending to be a passerby and playfully threatening Momo.[3]

Orlando and Nikki met up, discovered they had the same goal, and appeared at her manor to confront her.[5] The Mayor and Lunar revealed the plan that they elaborately produced fake designs and pretended to ruin Lunar's family spice in order to fool the Iron Rose.[6]

The Mayor grew up very close to her sickly older sister Xie Lisheng, and would do anything to make her happy. When she first learned that her sister's disease was incurable, she angrily demanded that the doctor do something anyways. The Mayor did everything she could to cheer up Xie Lisheng and help her endure not being able to dance. Eventually, the Mayor found the one thing that made Xie Lisheng genuinely happy: performing the prayer dance for her, and reminding her of how it felt to dance. Though it took lots of time to learn, the Mayor was happy to do it if it meant Xie Lisheng would be happy.[2]

Lunar and the Mayor are friends, and have exchanged many secrets.[8] Together, they worked to thwart the Iron Rose by creating fake spices and deceptive designs, and Lunar stayed at the Mayor's mansion while pretending to be kidnapped.[6]

Retrieved from "https://lovenikki.fandom.com/wiki/Mayor_of_Moonlit_City?oldid=168163"
Community content is available under CC-BY-SA unless otherwise noted.