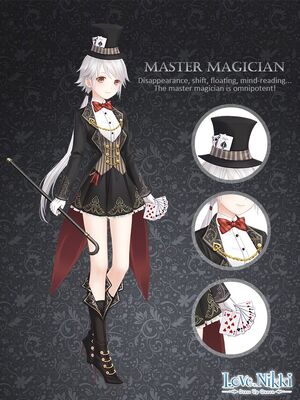 Master Magician is a Pigeon suit which can be obtained from draws in the Pavilion of Fantasy.

She is famous for her recluse style. She always disappears immediately after performance.
– Bright Long Hair

Master Magician is shuttling in the Pigeon Theater, her cloak looks like shadow.
– Mirage Cloak

The Master Magician never performs her magic twice for the same audiences, in the same time and place.
– Magician Top

She used to make the master designer statue in Wintermount disappear from Miraland for two minutes!
– Magician Bottoms

She has been making breakthroughs and challenging the limit of humans constantly.
– Magic Boots

The magician stands afloat with just one cane in her hand. Is it magic? Or mysterious power?
– Black Cane

All her props are made by herself. Her inventions are way greater than other magicians'.
– Magic Bowtie

The wondrous magician's hat seems to be connected with the four-dimensional world.
– Dimensional Hat 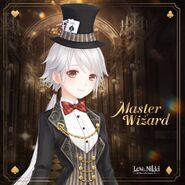 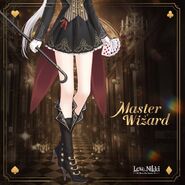 Retrieved from "https://lovenikki.fandom.com/wiki/Master_Magician?oldid=135102"
Community content is available under CC-BY-SA unless otherwise noted.