Love Nikki-Dress UP Queen! Wiki
Register
Don't have an account?
Sign In
in: Suit, Classic Suits, Crafting,
and 4 more 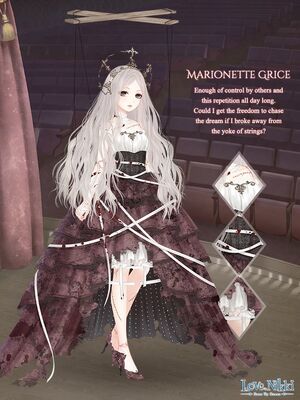 Enough of control by others and this repetition all day long. Could I get the freedom to chase the dream if I broke away from the yoke of strings?

Marionette Grice is a Classic suit –previously a Lilith suit– that can be obtained through crafting. It is a lifetime suit, a type of suit known to require a long time to complete due to the large amount of materials needed. The suit can be evolved to the suit Grice.

and an exclusive story.

Back to Classic suits

Ladies in Lilith Kingdom were proud of possessing a Pallas's marionette. Every marionette manufactured by the owner of Pallas puppet shop, a skillful master, was exquisite and priceless. But current success didn't satisfy him, Pallas's very dream was to make a human-like marionette, which people cannot distinguish from the living. The Pallas's puppet shop was dominated by such a semi-manufacture.

With snow-like delicate skin, silk-like soft hair and iridescent garment as dazzling as the rainbow, folks were amazed at the reality of this marionette. Grice, was the name Pallas gave her. But Grice had no eyes. No matter how valuable or scarce the gems were, they cannot be jeweled into her eye holes. After all, eyes were the essence of the soul. Regardless of the lifelike body, she was nothing but a soulless artificial puppet, which was also and always the regret for Pallas.

Long years flied, the doddering and sick Pallas felt his heart torn painfully as he stared at Grice in the center of his shop, the puppet who failed to star in any show of Lilith Puppet Troupe due to her lack of eyes no was eroded badly by age, for her soft hair bushed slovenly and her iridescent garment lost its color. Then his mind abruptly captured a bold idea : Since death is inevitable, wouldn't it be a good idea to sacrifice my own eyes to Grice?

This idea haunted him, inducing him to contemplate it for day and night. In the end, he closed his puppet shop and journeyed from Lilith Kingdom to find a method across the whole Miraland. His hard work paid off. As the story of Pallas spread to the depths of the Pigeon Forest, the elves decided to realize the aspirations of Pallas. They would not only grant Grice bright eyes but also repair her. But for Pallas who lost his eyes, he would never have a chance to witness the perfection of such a stunning masterpiece! All he can learn about Grice's fascination was the discussion beyond all praises of her captive audiences.

Finally, Grice stood tall upon the Lilith Puppet Troupe's stage like a shining superstar. Attracted by her fame, people across the entire Miraland came to witness her show. No one has ever watched such a vivid puppet show, with her especially captivating eyes, one glimpse will enchant crowded audiences into submission. Every show was packed with crowd, every ticket was priceless. Though blind, Pallas attended Grice's every show in person to feel her performance with his heart, which would fill him with the happiness of satisfaction... But it didn't last long, Pallas began to realize, something is not right about Grice...

When I open my eyes, I saw you, a blind yet such an exciting old man. You said you created me.
– Messy Turmoil

I a puppet, a special one. I don’t know if I should be happy or sad, but I have a soul.
– Puppet Grice


I hate being controlled by others, repeating the same show every day. I cannot even control my smiles.
– Broken Step


Is it that when I break free from the strings, I will gain freedom and be able to pursue my dream?
– Broken Yoke


The moment I see your smile, I feel the beauty of life for the first time. What a shock.
– Broken Silver Crown


I feel no pain from burning of fire or cutting of knife. But who can tell me why my broken heart hurts now.
– Broken Puppet


I'm but a puppet dominated by a single string. With this bloody body, let me dance last time.
– Bloody Bandage


You come for my every show even you cannot see anything. You look so happy and contented.
– Binding Bandage


I am a puppet with soul. The smile on my face never change, but who knows my real feeling.
– Downcast Soul