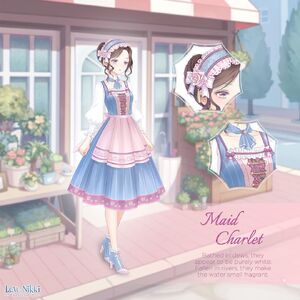 Bathed in dews, they appear to be purely white. Fallen in rivers, they make the water smell fragrant.

Maid Charlet is a Pigeon suit that could be obtained via a Log-in event from July 3rd to the 9th, 2020.

She was named Charlet and she was born in the house of Marquis Wren to be a maidservant.
– Simple Strand

Scarlet grows up with Miss Anna. They played in the Pigeon Forest and grape fields.
– Maiden Dress

High heels are not really convenient for work, but she tries to overcome all these because that's part of the work.
– Grape Preserve

Before Scarlet was born, her parents were favored by the marquis. They survived that starving winter.
– Blue Bowtie

The suit is about Charlet (also spelled Scarlet), a girl who worked as a maidservant in the house of Marquis Wren. This is a position she was born into, and her parents also knew Marquis Wren. The marquis' fondness of them meant that they survived even a difficult winter, and Charlet was born.

Charlet was a selfless person who tried to help the poor and rarely thought of her own well-being. She grew up with Miss Anna, and together they played in the Pigeon Forest and grape fields. However, Charlet still worked as the maidservant, where she wore heels even though they were inconvenient.

Marquis Wren is likely the same person as Marquis Rayman, who is mentioned in the suit Miss Anna.

Retrieved from "https://lovenikki.fandom.com/wiki/Maid_Charlet?oldid=146233"
Community content is available under CC-BY-SA unless otherwise noted.