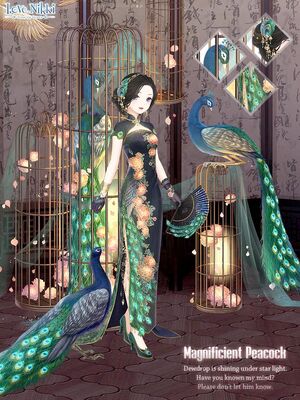 Dewdrop is shining under star light. Have you known my mind? Please don't let him know.

Magnificent Peacock is a Cloud suit that can be bought in the Association Shadow Workshop.

Whirling moonlight is faintly reflected on travelers. Wish the ringing would guide him back home.
– As Cloud on my Hair

Dewdrop is shining under star light. Have you known my mind? Please don't let him know.
– Blue Feather of South Wind

May the place he stopped by become prosperous, and the people he met be blessed.
– Blue Feather Golden Bell

Deep in the clouds and mist, there's a beauty named Biwa. People admire her voice, but no one knows her secret.
– Jade in the Mist

Biwa looked up at the carved golden cage, inside which is a colorful peacock. She smiled and continued singing.
– Blue Feather with chord

The guests returned with full joy, never noticing the feathers attached to them.
– Blue Prayer Beads

Biwa is good at singing and dealing with people and she also raises hundreds of rare birds.
– Green Stipples in the Sky

Sunset sunk in the mist, leaving only a damaged vision. The town of music was destroyed by the arrow in his hands.
– Green Light Feather

I used to miss and worry about you a lot. But now why have you become so cruel and violent?
– Dressed Branches

Biwa stepped into the hall and presented a secret letter. 'Biwa, are you still not going to release him?'
– Blue Feather Fan

Biwa recorded everything happened on paper. Putting it inside the secret letter, she gave the letter to Zhu.
– Brocade

Thank you for your concern,' Biwa answered with manner and calm, 'why should I release such a rare creature? '
– Blue Feathers in the Dawn

People only admire the beauty of the rare creatures but don't care about their sadness.
– Wreath Lantern

This love has given me extreme happiness and also great misery. My love and hate are all about him.
– Shadow and Fragrance in Dark

Magnificent Peacock is about a woman named Biwa, who has a beautiful singing voice and would sing for guests. She also keeps hundreds of other rare birds, including a colorful peacock. The peacock would sit by her while she sang, and the feathers of the birds would attach to her guests, unnoticed by them, before they happily returned.

However, Biwa had a secret. She keeps her love trapped due to how he became cruel and violent over time. He brings Biwa happiness but also misery.

Biwa also secretly passed information to Zhu Yuxian, which she picked up from the feathers of her birds. Zhu Yuxian, while picking up information from her one day, wanted to know whether or not she would release her lover. She thanked him for his concern but said that she would never release such a "rare creature".

(This interpretation is based on an alternate translation of the Chinese item descriptions by bamboo snek#3897 on Discord.)

Retrieved from "https://lovenikki.fandom.com/wiki/Magnificent_Peacock?oldid=144769"
Community content is available under CC-BY-SA unless otherwise noted.