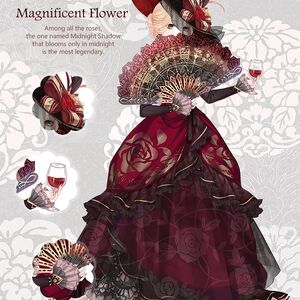 Among all the roses, the one named Midnight Shadow that blooms only in midnight is the most legendary.

Magnificent Flower is a Pigeon suit that can be obtained through the V14 Privilege giftpack.

Among all the roses, the one named Midnight Shadow that blooms only in midnight is most legendary.
– Magnificent Flower

Ms. Maguer is known for her love of flowers. Even her dress is designed from Midnight Shadow.
– Silent Night

You're the tender night, who fondles the petals of a flower.
– Night Curtain

Only in the midnight, the rose will blossom.
– Rose Mask

The suit tells the story about Ms. Maguer, a designer who loves flowers. There is a rose called Midnight Shadow, which only blooms at midnight. Ms. Maguer designs a dress inspired by it, which became famous overnight.

Retrieved from "https://lovenikki.fandom.com/wiki/Magnificent_Flower?oldid=146337"
Community content is available under CC-BY-SA unless otherwise noted.