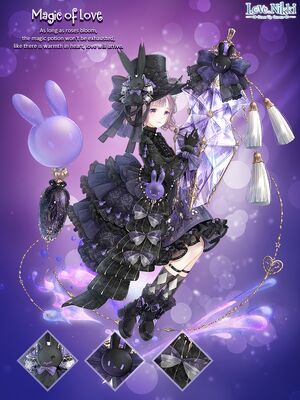 As long as roses bloom, the magic potion won't be exhausted, like there is warmth in heart, love will arrive.

Magic of Love is a Lilith suit that appeared in the Fairy Tale in Bottle Event.

There exists a little witch in the forest holding a glass bottle.
She values this bottle as much as her own life, and will not trade it for even the most valuable jewels.
'Little witch, why do you adore this bottle so?' asks a curious swallow as it roosts nearby.
'As this bottle holds a most wonderful concoction: a love potion!' she replies,
'Once sprinkled, its magic will surround you, capturing your beloved's heart with just a whiff.'
'Amazing!' the swallow cries as it flutters down. 'Love comes naturally to some, but for others, it's harder than flying without wings'
– Suspicious of Obsession

'This bottle possesses a wonderful magic.' The witch smiles as she caresses the bottle gently. 'So long as there are roses in the world, it will never run empty.'
The chatty swallow spreads the story of the bottle far and wide, and the forest soon fills with visitors from all corners of the world, hoping for a sprit of that magical potion.
Beautiful maidens and poor beggars, sentimental poets and blunt scholars; The kind witch never refuses.
A rose for a dose of potion, and its smell differs from person to person.

The little witch is overjoyed to have smelled so many people's potions. Seeing all of her guests so happy makes her feel equally as happy.
– Hesitated Footsteps

One day, as the witch gathers morning dew as usual, she passes through a thicket of flowers and sees a stranger within.
'He must be a prince!' she whispers to herself. 'His hair is silver as the moon, his eyes as deep as the ocean, and he stands tall as the tallest tree in the forest.'
'My honorable guest, why have you come to this place? Have you come to attain a love you believe to be unattainable?'
The human, seeing the witch emerge, smiles as radiantly as the sun.
'I don't have to,' he says. 'I am a prince, and can choose any lover in the world with just a look. Because of this, however, I have never loved anyone myself.'
'Then why are you here, your highness?'
'I hear there are countless kinds of roses that grow here. I've come to see these roses with my own eyes.'
– Void Illusion

Disappointed, the witch walks away, but cannot remove the image of the prince from her mind. She knows full well that her own heart has been captured, that she has fallen for him.
Now plagued by her own heart, she opens herself to the magic of the roses, and slowly twists open the bottle in her hand.
'I've experienced the scent of so many people's love, but do not know the scent of my own.' She cautiously looks around. 'But is this truly the right thing to do?'
She stares at the bottle, enraptured by its flowing contents. A squirrel overhears her and, scurrying down from its tree, it knocks the bottle onto her clothing.
Filled with unnatural ecstasy, the witch lifts the hem of her dress and takes off into the forest to look for the prince of her dreams.
– Love Trial

The prince's nose is ambushed by an unprecedented and complicated scent. Fascinated by it, he turns to its source and sees the little witch running at him.
'I have never loved anybody in my life, and I thought it would always be so...'
The prince claps the witch's hand with his own. 'But now I know I was wrong, for I have fallen in love with you.'
The prince and the witch fall into the depths of love, walking hand and hand through the forest roses and to a grand feast laid out in honor of the prince's newfound love.
When the witch returns to her home in the forest, she anxiously paces her room in the cold darkness of night.
– Nature Whisper

'What is happening to me? I just experienced the love I've always wanted, yet my heart is uneasy, even constricted. That sweet smell of roses... why does it smell so acrid now?'
The witch hugs the bottle, unable to sleep all night. At dawn's first light, she makes a decision.
'I want to give you a test, to see if you truly love me.'
The prince looks gently at the witch. 'You could test me a hundred-thousand times, and I would never retreat, for I love you more than anything.'
She speaks, 'First, I desire the crystal guarded by the sleeping dragon on the glacier.'
– Moony Dream

The prince nods. Taking up his bow and arrow, he mounts his warhorse and leans down to kiss the witch on her forehead.
'I shall bring it back for you.'
A month later, the prince returns with his hair cut short by the beast's claws, his horse lame in one leg, and his bow broken in two... but smiling victoriously, with a gem in hand.
'I have brought the crystal back for you, my love. A fittingly precious gem for a lady as beautiful as you.'
To this, the witch replies, 'But I am not fit to wear this gem, for I am not human.'
The witch takes off her hat to reveal a pair of wolf ears, her long-hidden fangs also coming to light. Aspects of ferocity hidden behind her beauty: this is the second test.
– Inexhaustible Bottle

'Whether you are beautiful or ugly, young or old, I will always love you.'

The prince embraces his lover, and places the crystal in the witch's palm.
He sees the beastly witch through love-struck eyes. For the third test, he renounces his crown and power, and swears to live as a farmer for the rest of his days to prove his love.
And so, under the guise of a normal farmer and his wife, the two live a happy, ordinary life in a small village.
But one night, the witch runs out of the village. Back in the forest, she weeps silently as she clutches the glass bottle.
– Love Mist

The squirrel that had once helped her hears her sobs, and cries out as it emerges from its tree. 'Little witch, what makes you cry so, when you've been living such a happy life?'
The witch replies, 'Because I must soon give him the final test. My heart has never been in so much pain.'
Holding up her beloved bottle, one last tear rolls down her cheek.
As it is a magical bottle, shattering it on the floor will also break its spell.
After the potion's magic wears off, the little witch returns to her cottage only to find it empty. On the table, a set of course farmer's clothing lies folded.
The witch understands: she has lost her lover. He was a prince, after all, and he would never return.
– Potion Fanatic

The witch has a bottle of magic perfume which can end all bitter loves and let your beloved love you back.
– Moony Dream

The aroma of thousands of morning dew, stars, and flowers in the bottle is the witch's beloved collection.
– Potion Fanatic

When the prince comes into the forest, the little witch feels confused. 'He's coming for the roses, not me.'
– Suspicious of Obsession

When she opens the bottle again, the owl sighs, 'Love is a perpetual riddle. Magic can't give you an answer.'
– Hesitated Footsteps

Animals in the forest gather and talk, 'Oh, the little witch and the prince fall in love!'
– Nature Whisper

But the real trial is not the hardships the prince experienced, but the witch's heart. Is the love a phantom?
– Void Illusion

The witch sits alone in the cold brook, even the magic cannot calm her down from her love knot.
– Inexhaustible Bottle

The witch cries sadly for losing her lover. But what is it about the relief? It's a riddle magic can't answer.
– Love Mist

As long as roses bloom, the magic potion won't be exhausted, like there is warmth in heart, love will arrive.
– Space Treasures

The witch touches her crystal bottle, like farewell to her lover. Her heart cracks together with the bottle.
– Affectional Fragrance

Retrieved from "https://lovenikki.fandom.com/wiki/Magic_of_Love?oldid=128425"
Community content is available under CC-BY-SA unless otherwise noted.