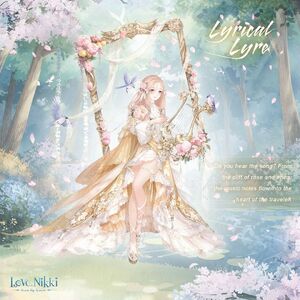 Do you hear the song? From the cliff of rose and erica, the music notes flows into the heart of the traveler.

Lyrical Lyre is an Pigeon suit which first appeared as a Cumulative Recharge suit from May 5th to the 11th, 2019 for 810

Completion Prize: A Styling Gift Box containing From Beyond and 35

Do you hear the song? From the cliff of rose and erica, the music notes flow into the heart of the traveler.
– Notes on Rose

But compared with the magnificent decoration of the castle, the singer is more famous. Where is she from?
– Voice of Angel

The high nobles would always enjoy a song after dinner. When Lyre was played, time was saved.
– Time Collected

With no market and streets, master's little daughter is fed up with the cliff, but to her, music is everything.
– Golden Cage

Her songs witnessed the grand wedding of the master's daughter, where flowers and gifts pile up.
– Flower Blessing

Her songs witnessed the funeral of the hostess. The song is low and the wind sounds like sobbing.
– Poet of Gravity

Sometimes, her songs have no lyrics, only beautiful melody over the lyre. Who gave her those inspirations?
– 7-string Recitation

From morning to night, only if she's singing, nothing else would concern her. She was completed in the music.
– Single-minded Nightingale

The song from the beyond the mortal world can never be imprisoned. On the remains of the castle, her song stays.
– From Beyond

On the cliff, seagull brings seeds and stories from afar and every word was rendered into a note.
– Legend of Waves

Lyrical Lyre is about a traveling bard. She sings and plays the lute from morning to night at a cliff full of roses and erica. Her songs had no lyrics sometimes, only beautiful melody. Nothing else would concern her, because she was fulfilled by the music.

She once performed in a magnificently decorated castle near the cliff: a golden chandelier with rose and wave patterns and gem-embedded lights hanged from the ceiling, stunning everyone. The high nobles would always enjoy a song after dinner. However, even when compared to the luxurious setting, the bard was actually more famous, yet no one knew where she was from.

Her songs witnessed stages of the master's daughter's life. With no markets and streets around, the master's little daughter was fed up with only the cliff. This didn't bother the bard, since music was everything to her. She was there when the master's daughter had her grand wedding, where flowers and gifts piled up. She was also there during the hostess' funeral, her song low and the wind sounding like sobs. It is unclear who exactly the hostess is, but one interpretation is that the hostess is the master's daughter, with the assumption that she grew old and inherited the castle. The passing of time from the master's daughter being "little" and her marrying supports this theory. That would mean the bard holds some form of mysterious powers, which is already indicated in From Beyond: her song comes from beyond the mortal world and can never be imprisoned. Her song still stays on the remains of the castle.

Aside from wondering where she was from, people also wondered who gave her inspirations. Legend of Waves hint that she receives them from a seagull who visits her at the cliff, bringing seeds and stories from afar, rendering every word into a note. The seagull in question might be Pheral of Winged Journey, as she is known to share tales.

Retrieved from "https://lovenikki.fandom.com/wiki/Lyrical_Lyre?oldid=145766"
Community content is available under CC-BY-SA unless otherwise noted.