Love Nikki-Dress UP Queen! Wiki
Register
Don't have an account?
Sign In
Advertisement
in: Characters, Recurring Characters, Females,
and 2 more

依礼（キャラクター）
Lu Yinian is a character in Love Nikki. She is the Landlady of the Moon Inn on Long Street, Cloud Empire.

Lu Yinian has black hair that she keeps tied up with an ornament, grey eyes, and a beauty mark next to her left eye. She wears a beautiful red and yellow gown with a transparent black layer on the outside.

Lu Yinian may be the owner of an inn, but she also enjoys talking about styling and designing.[1] She also understands the importance of protecting and standing up for friends, which she demonstrates when Bai Jinjin's father's men come for her at the Moon Inn. She protects Nikki from being taken when the conflict escalates by fighting the opponents off.[7]

As a child, Lu Yinian's father was sick, and she spent her days working hard and fishing for him.[5]

One day while she was fishing, the river took her to a shore she'd never been to before. She parked her boat by the shore and got out, only for the sky to darken, signaling the arrival of rain. She went to go find somewhere to hide, but came across an injured blue magpie. After the rain stopped, Yinian brought the magpie home with her.[5]

Another day, Yinian came home from fishing again and saw a boy taking care of her father. She realized the boy was the blue magpie she had saved. The boy healed her father and made sure everything was okay before preparing to leave.[5]

However, the blue magpie continued to visit her. Even though it was a bird, they kept each other company while she fished and cooked dinner. Yinian got the chance to study in the town, and it followed her there too. When it rained, the magpie became a boy again and carried an umbrella for her so her textbooks wouldn't get wet. Yinian's graduation was attended by a flock of magpies, which were there to congratulate her.[5]

Lu Yinian opened the Moon Inn, and it became quite popular. Many people offered to marry her, but she refused all of them. Though the blue magpie was no longer with her, she always remembered that he had promised to accompany her throughout her youth.[5]

At some point, she became a heroine and a fighter.[3]

Nikki and her friends first met Lu Yinian when they arrived at the Moon Inn at Long Street. Momo remarked on her beauty, but Nikki soon got into a conversation about styling with her and a styling battle, and they realized she was more than just a landlady.[1]

After Nikki reunited with Bai Jinjin and Zhong Lizi at the inn, Lu Yinian warned them that Bai Jinjin's father had sent men after her to bring her back after she ran away from home. Nikki took her place in order to facilitate her escape.[8] However, even after Bai Jinjin reached safety and Nikki revealed that she wasn't the person they want, they still tried to kidnap her.[9] It was then that Lu Yinian came in as her past self and began to fight Bai Jinjin's father's men off.[7]

While in Welton, Nikki and her friends happened across a restaurant and discovered that it was also run by Lu Yinian. They congratulated her on her success in Apple, and she shared the good news that Cloud City has been reclaimed by Zhong Lizi. Since the restaurant was busy, Nikki, Momo, and Bobo helped her, acting as waitstaff.[10] 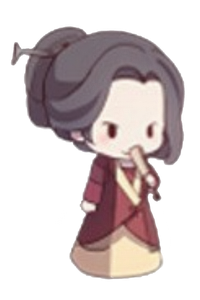 From the Moonlight Dancer event map