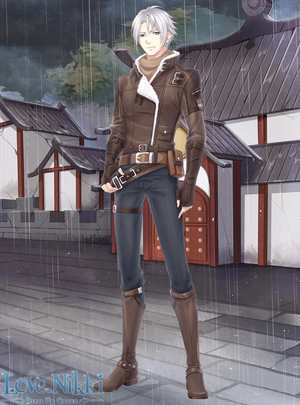 Knight Commander of the Knight of Kingdom (father) †[4][5]

Louie is a character in Love Nikki. He is the head of the Nameless Chivalric Order, an order of dedicated knights that safeguard the key to Miraland's peace.

Louie is a very kind person, noble and self-sacrificing, and is always looking towards what is best for others. It is said that he has a lot of pain in his heart, but his duties as a soldier are more important;[6] as such he is endlessly devoted to what he believes in, no matter the pain this brings him.

At age six, Louie was given his first knight spear and began his training under his teacher, Master Lionel. Even though he didn't understand why he had to learn to fight, Lionel told him that he would understand when he grew up.[7]

During this year, Louie left Black Water City to become a mercenary, propelled by a desire to fight for his faith.[8]

Note: This is likely an error in the timeline made by the writers, as later lore indicates that Louie still resided in Black Water City.

Now seventeen years old, Louie and Nidhogg were both preparing to potentially succeed Louie's father as the Knight Commander of the Knight of Kingdom. They had a duel on October 10th of this year, and though neither were at his skill level yet, they both had talent of their own and showed promise of becoming good warriors in the future.[4]

At an unknown date, the camp of the Knight of Kingdom where Louie, Nidhogg, and Louie's father were staying was broken into. The armed men who attacked were not enemies but rather "comrades" who were attempting to grab power for themselves through infighting. The Knight of Kingdom were outnumbered and their loss was imminent as they struggled for their own survival.[5]

During the fight, the knights began to be overwhelmed by the backlash of the Blood Curse, but their opponents suffered no ill effects. They likely had been taking a secret potion that was only available among the elites in Black Water City, which suppressed the effects of the Blood Curse.[5]

Eventually, the fight ended when Louie's father was so overcome with the pain of the Blood Curse that he died in battle. Louie and Nidhogg both went their own separate ways after that battle, parted from the rest of the knights.[5]

Sometime during this year, Louie crashed his helicopter in the Cloud Empire and fell unconscious upon being injured. He landed outside Lunar's house, where she found him and tended to his wounds. When he woke up, he thanked her for saving him and asked her name.[1]

Lunar was interested in his North-style clothes, and began to analyze them from a designer's perspective while he was injured. Louie started to laugh, and told her that he never expected to meet a girl who was so beautiful and quiet despite her being a "style-holic".[9]

He told her a bit about the North Kingdom, as she was curious about how it could possibly a country of bloodshed when people solve disputes using styling battles. He accidentally let out a laugh before telling her that she was still young, so there was a lot she didn't understand yet. She was confused as to why he still wanted to return to the North when it was dangerous, rather than stay in Cloud, and he began telling her all of the things he loved about North: the hot pot, the ice skating and sculptures, the boots, and the Flame Flower. He offered to take her to his hometown one day if the war ended, and Lunar confidently told him that one day she would be the best designer so that she could stop the war.[10]

After he recovered from his injuries, Louie tried to leave Cloud and return to his mission without saying goodbye, but Lunar saw him and asked to come with him. He recognized that she was still young, as she was only thirteen at the time, and told her that one day she would leave Cloud too and make her mark on the world. She was still sad, so he gave her his medal, and in return she gave him her phoenix Blue. Louie was surprised by the gesture, but she insisted, saying that Blue could deliver letters between them and protect him in the North. He promised her that in ten years they could meet again and be together.[11]

Louie spent Christmas during this year at a tavern in the North Kingdom, though he didn't participate in the festivities, choosing instead to sit in the corner and attempt to write Lunar a letter. While he was there, a waiter brought up the Nameless Chivalric Order, saying that with a story about them, he would be able to impress her. The waiter firmly believed that they were just a legend, but Louie muttered that it wasn't a story to him.[12]

While he wrote his letter, he received a message on his watch, which showed random numbers he quickly wrote down. He decoded that the message was an urgent call to retrieve a dossier in the Snow Corridor, with the client being Dr. Morrison. Confused, he quickly called for the check and left on his motorcycle.[13]

On his way to the Snow Corridor, Louie ran across an unusual number of warriors who seemed more organized than the normal ones he encountered. He began to suspect there was something important hidden in the Snow Corridor.[14]

Once he reaches the fortress, he takes note of the white robes the warriors are wearing and their insignia. Suddenly he recognized one of them as Lionel, his respected spear teacher. He had been under the impression that Lionel had gone missing or died ten years ago, and was surprised to see him there. Though his client was Morrison, he didn't think Lionel would steal his work like that and suspected that there was more to the story.[14]

He approached Lionel and they both recognized each other, though Lionel criticized Louie's current job as a mercenary.[14] After a quick styling battle, Louie explained what he was there to do, and asked that Lionel explain as well. Lionel revealed that he did not use the name "Lionel" anymore, as he had thrown it away years ago like the other warriors, and Louie correctly guessed that he was part of the Nameless Chivalric Order. Since Louie didn't feel right about Morrison's commission, he asked to know what was really in the Snow Corridor, but Lionel refused to tell him.[15]

Suddenly a stiff-moving figure appeared on a cliff, and it seemed to be holding a key. The Nameless Knights jumped into action, saying that the "key" had been stolen. Louie offered to help them, feeling responsible for the theft of the key since he had broken into the fortress and left it open.[15] They followed the footsteps in the snow to a laboratory, where Louie opened the gate for the Knights.[16]

After entering the lab, the door slammed shut behind them, and Louie warned them to be on their guard. As they looked around, he determined that any damage to the equipment would trigger a defense system; however, he believed the person they were pursuing was still there. The temperature was also falling quickly, another defense system, and Louie decided to cut off the power. After the equipment was disabled, they found a secret passageway to the basement.[16]

A robot, likely the same robot that had stolen the "key", attacked Louie, but he brushed it off quickly and reached the end of the tunnel. A helicopter was taking off, Morrison inside, and Louie managed to drag Morrison out and take the key from him. Morrison told Louie that if he had just done his job properly, he wouldn't have had to do it himself, and when Louie revealed he didn't even know what Morrison was after, Morrison laughed at him.[16]

After the Nameless Chivalric Order handcuffed Morrison, Lionel told Louie that the "key" was the key to what the Order guarded. Louie recalled the legends, knowing that the Order guarded something that could return peace to Miraland, and began to speak, but Nidhogg appeared and cut him off, telling him that true peace didn't exist.[16] He asked Louie to hand over Morrison, but Louie refused and they began to fight.[17]

In the midst of the skirmish, Shade appeared and shot Lionel, but not before Lionel stabbed Morrison with a spear. After Nidhogg left, disappointed that Louie did not want to fight on his side,[17] Louie and the other Knights tried to heal Lionel, but it proved futile. Before he died, Louie showed him the key, and Lionel told him though true peace did not exist, it was the clue to breaking the Blood Curse.[18]

Though Louie wanted to pursue eternal peace, and had believed the key was the key to bringing about peace, he realized then that what he wanted did not exist. Lionel offered him the spear, asking if he wanted to become a Nameless Knight, but saying it was okay for him to refuse. Reflecting on his past and remembering Nidhogg, Shade, Lunar, and his father, he agreed to become a knight, and repeated the vows after the soldiers.[18]

The next morning, Louie left the lab with the other knights after burying Lionel. Lunar's phoenix, Blue, appeared then, and he realized he could not send her his letter. He told the bird that he had to break his promise, as the Louie she knew died yesterday when he became a knight, but he vowed to protect her from the shadows.[19]

After Lunar was killed by Nidhogg as a result of their duel, Louie showed up in Cloud City. He first asked if he was too late, saying that he had an agreement with her. Then he saw her, kneeling down to look at her. The Blue Bird appears, flying around the two of them. Louie thanked Nikki for being there for Lunar no matter what and then took her body to Moonlit City, where her family lived.[20]

Louie reappeared after Nikki, Momo and Kimi, having been captured by Dr. Gray Raven, found themselves in front of Nidhogg. After Nikki was struck with Nidhogg's Dark Verdict, Louie broke in and fought Nidhogg himself, asking him if the truth he sought was a "a bloodstained world". This gave Nikki and her friends the chance to escape, with help from Debbie and Ace.[21]

Louie met Lunar in the year 670 when he crashed his helicopter, and she tended to his wounds.[1] He sparked her curiosity about the world outside of Cloud, and though she wanted to leave and travel with him, he knew she was still young and had a lot of growing to do before she could possibly go to North again. However, he made a promise that they could meet again after ten years.[11] They spent the next seven years exchanging letters.[22] However, after he became a Nameless Knight, he decided to stop sending her letters, knowing that his path in life had diverged.[19]

Louie appeared in Cloud City shortly after Lunar's death, mourning that he was too late to save her. He wiped the blood off her face and stroked her wet hair sadly before carrying off her body back to her home, Moonlit City.[20]

Louie and Nidhogg grew up fighting alongside each other as allies.

Retrieved from "https://lovenikki.fandom.com/wiki/Louie?oldid=136057"
Community content is available under CC-BY-SA unless otherwise noted.