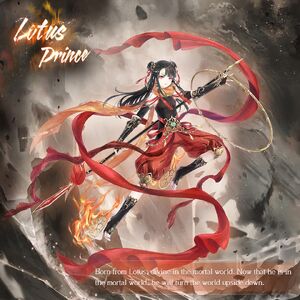 Lotus Prince is a Cloud suit that could be obtained from a Cumulative Recharge from February 12th to the 18th, 2019, for 260

The youth rampage is but a wave in the ocean of fate. Armillary Sash stirs the ocean of old scores.
– Wind and Fire

When the world fell in tumult, he would come out and cleanse the evil.
– World in Tumulta

The sash can stir the sea, but also move the hearts. He's the fearless warrior patroling the world.
– Armillary Sash

After he sacrificed himself and returned his body to his parents, the fire in his eyes didn't go out.
– Sealed Years

If nature is where I come from, why let me meet my parents. Mother's face showed up in his mind and drew the sword.
– Bitter Lotus Seed

He can turn into a demon-like 'three heads and six arms' form, but this form only shows in front of demons
– Battle Form

The fire burns down the thick mist, the edge is cold like frost under the moonlight.
– Fire-tipped Spear

Made from World Stone, the Univer Ring is the tool used to create the world. It brings demons into restraint.
– Gold Universe Ring

He now serves as a heavenly general. His artifacts may look elegant, but they are the terror to the demons.
– Elegant Terror

His forthright nature didn't change a bit all the time. He owes nothing to nobody after he made the sacrifice.
– Fiery Eyes

Having swept the 96 great demons, he is the guardian of the gate to heaven. The cloud may remind him of the past
– Peace After War

The orb is his soul, the lotus is his body. Now he transcends the samsara and becomes a real deity.
– Clean Lotus Orb

Lotus Prince is based on Nezha, a protection deity in Chinese folk religion. His official Taoist name is "Marshal of the Central Altar" (中壇元帥). He was then given the title "Third Lotus Prince" (蓮花三太子) after he became a deity. 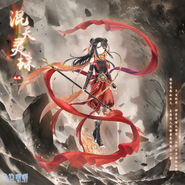 Retrieved from "https://lovenikki.fandom.com/wiki/Lotus_Prince?oldid=145581"
Community content is available under CC-BY-SA unless otherwise noted.