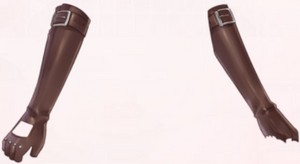 The long half-finger leather gloves are very soft and have the room to hide a small dagger. That's true for sure.

Crafting
Long Leather Gloves can be obtained through Recipe Crafting.

Retrieved from "https://lovenikki.fandom.com/wiki/Long_Leather_Gloves?oldid=157619"
Community content is available under CC-BY-SA unless otherwise noted.