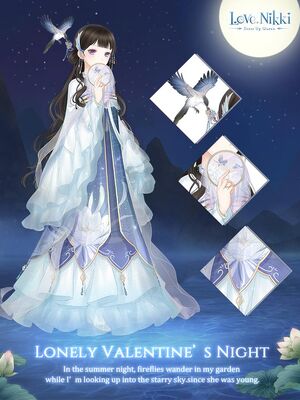 In the summer night, fireflies wander in my garden while I'm looking up into the starry sky since she was young.

Lonely Valentine's Night is a Festivals suit that appeared in the Cloud Valentine Event. It can now be crafted and its recipes can be bought in the Store of Starlight.

In the summer night fireflies wander in my garden, I sit in the yard looking up into the starry sky.
– Night Date

Girls do the needlework in the half-moon glow, praying for love that Lunar would endow.
– Magpie Hairpin

There is a legend about a celestial couple in Cloud that even the milky way cannot separate them.
– Lonely Night

On the bridge of magpies across the Milky Way, the couple meets each other from far away.
– Jade Bracelet

Clouds float like works of art. A moment of true love overwhelms those ordinary days and nights.
– Jade Necklace

On that day, the Cloud girls will have a contest to find out the one who is best at needlework.
– Jade Plate

The Milky Way is clear and shallow; Across it the two stare at each other in deep affection.
– Endless Miss

The suit is based on the Qixi Festival, a Chinese festival, and the legend it is based on. According to the mythology, the cowherd and weaver girl's love was not allowed, thus they were banished to opposite sides of the Silver River (symbolizing the Milky Way). Once a year, on the 7th day of the 7th lunar month, a flock of magpies would form a bridge to reunite the lovers for one day. There are many variations of the story, and the festival has variously been called the Double Seventh Festival, the Chinese Valentine's Day, the Night of Sevens, or the Magpie Festival.[1]

Retrieved from "https://lovenikki.fandom.com/wiki/Lonely_Valentine%27s_Night?oldid=145627"
Community content is available under CC-BY-SA unless otherwise noted.