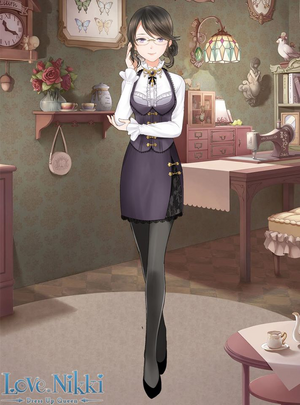 Lisa is a character in Love Nikki. She is a worker of the Lilith Government who served as the manager of the theater in Cicia in order to carry out a plot.[4]

Lisa is a fair-skinned adult woman with shoulder-length black hair worn in a low bun with a single curled strand left loose from it. Her forelocks are curled, and her bangs are split off-center, mostly brushed to the left. She has small lavender eyes and wears oval-shaped glasses. Rarely she will wear her hair loose, and she wears light makeup.

Her attire is mature with a color scheme revolving around black and white. It includes many lace accents and she often wears necklaces and simple shoes, giving her a simple, but elegant look.

Her work attire consists of a white blouse with ruffle accents and grey fabric on the chest, worn beneath a black vest held by gold straps. She also wears a short black pencil skirt with a large slit on the corner, black pumps, sheer black tights, and a black and gold choker.

Casually she is shown wearing a grey and white striped top with lace lining beneath a denim jacket, denim quarter pants, white slip-ons, and a gold necklace. Her other casual outfit is composed of a lilac floral dress under a white jacket, a simple necklace, and a pair of sandals.

As a thief, Lisa switches to a black revealing outfit that shows off her curves with several areas of skin exposed. She switches her glasses for a mask.

Lisa is a cool and calm woman focused on her work and getting a job done. She is serious, but she's not above being casual or friendly towards others, and even being lenient towards them should they do something that most others wouldn't approve of- which may imply that her normal outward personality is a ruse due to her alternate career as a thief. She is quick-witted and not above trickery, but she also remains fair.

During this year, Lisa served as the manager for the Cicia theater, overseeing a performance of 'Candy Witch and Star Sea' while secretly investigating threats made by a phantom thief to steal the legendary dress Star Sea.[4] Nikki, Bobo, and Momo first overheard Lisa speaking to another girl after they headed inside the theater. Lisa complained over how badly things had been going as of late, only to realize they were there and express shock. She told them to return the following day since the Troupe was out at the time, but not before challenging Nikki to a styling battle.[1]

She later appeared at a barbecue which Nikki and her friends were invited to by Toto. Lisa took the chance to properly introduce herself and explain that she was there on a date with her boyfriend.[6]

The following day, Lisa greeted Kimi and Joe, who were there to see the beautiful dress Star Sea. Lisa then went to meet Nikki and explained how special the dress was, and how the most beautiful model and actress in Lilith, Sofia, would be wearing it during 'Candy Witch and the Star Sea'. She mentioned that this had been what she thought the group was after when she caught them a few days prior, and they asked to see it. Lisa said they could, but only if Nikki could defeat her in a styling battle.[2]

Lisa called out sick on the day of the play, apparently having overworked herself to get everything right for Prime Minister Nidhogg, who was to attend the show.[3] However, Lisa was secretly in the machinery room, planning to mess up a mechanism that would disrupt the first show.[7] Indeed, her plan succeeded and one of the stage scaffolding fell near Sofia during the show, who managed to use her quick reflexes to jump away unharmed.[8]

Nikki and her friends confronted Lisa, who revealed her plot and the fact that she had been working for someone. Though she lamented that she was caught and had to give back the Star Sea, she cryptically told Nikki that someday she will understand everything that is going on, before she was taken away by the minister's guards.[7] Unknown to Nikki, however, the guards were only a ruse to distract from the fact that Lisa was working with the Lilith government, not against them.[4]

Some time later, while speaking to Orlando, a high-ranked officer of the Apple Federation, Nikki asked him about Lisa. Orlando said that he knew of her, though since it was an issue of Lilith he was not involved. He said that she was not a manager nor a thief, and the fact that she had had to steal the Star Sea meant that something regarding her plan had gone wrong. He also reinforced that she was truly somebody that had just been following orders.[9]

Lisa happened to also be in Moonlit City at the same time as Nikki and her friends, and explained more information to them about the true nature of the situation, including the fact that she was never actually the manager. She said that she was appointed with pretending to be the Phantom Thief after the Lilith government managed to reach an agreement with the true thief's family. This was done to deceive a common enemy, who she declined to reveal at the time. She then said that she would next be going undercover as a teacher and needed to practice her disguise.[4]

Retrieved from "https://lovenikki.fandom.com/wiki/Lisa?oldid=142225"
Community content is available under CC-BY-SA unless otherwise noted.