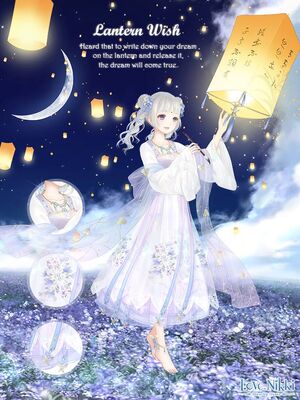 Heard that to write down your dream on the lantern and release it, the dream will come true.

. Completing this suit will grant the player the Flute's Thoughts suit. The suit can also be customized.

The Harvest Festival has been scheduled to take place in this distant Cloud village on the seventh day of the seventh lunar month. The village elders chose this auspicious day to not just celebrate their harvest, but so that the faithful youth of the village could harvest their feelings of love for the special person in their lives. On this night of flickering candlelights and traditional, couple-themed activities, many young ken and women are encouraged to proclaim their affection and foster budding romances.

Emmy, now sixteen years old, is the naive, cheerful, and somewhat stubborn eldest daughter of her clan’s head. Ever since her childhood, she has always fancied Vane, the second son of a rich family from the northern edge of town. In Emmy’s eyes, Vane is like her silent protector; ever since she could understand the idea of love, she has always known that the one she loves is Vane.

“I’m going to be the one to watch fireworks and light destiny lantern with Vane this year!” says Emmy’s close friend and confidante as she talks about her plans for the Harvest Festival. Emmy is envious of her confidence. Every year, during the Harvest Festival, the town holds a fireworks celebration, and the girl who is to light the fireworks hanging from the edges of the roofs along the street is known as the ‘Maiden of Fate.’ As the eldest daughter of the clan head, Emmy succeeded her elder cousin as 'Maiden of Fate’ four years ago, when her cousin got married. As such, she has never gotten to spend the Harvest Festival with the boy she loves, like every other girl in the village; she’s never watched the fireworks, played at the street air, or lighted a destiny lantern with him ever before.

One hot evening, Vane and Emmy walk along the river’s edge, listening to the cicadas chirping their songs of summer. As the river gurgles, the sound of a flute hangs in the hot air, and Emmy hears that familiar voice say, “Emmy… I’m leaving next month.” She looks at her dearest Vane, her eyes full of refusal; she knew that he would leave the village someday, to make a difference in the world, but did it have to be so soon?

“I don’t want to be the Maiden of Fate anymore! My younger sister is of age now; she could be a great Maiden of Destiny, too!” This was the first time Emmy, a good and obedient girl, rejected the wishes of her clan. Although her father heatedly pressed her for a reason, she only shed quiet, stubborn tears and refused to tell him why; that the reason for her refusal was standing right here in front of her, silently frowning.

Seemingly ignorant to her struggle, Vane urges Emmy to continue being the Maiden of Fate, as she is the most beautiful one he has ever seen. Emmy is very happy to hear Vane’s heartfelt praise, but insists on refusing the responsibility given to her by her clan - just once, she she wants to spend this unforgettable night with him. But the time is not right, and Emmy nevertheless begins to cry. She walks out to relieve herself of this 'annoyance’ by getting some fresh air. Not knowing how to coax a girl into understanding, Vane can only follow at what he presumes is a 'not-annoying’ distance. He takes out a jade flute and plays a tune in the scorching heat to dissipate the anxiety in the air…

In the ancient town of Cloud, the daughter of clan leader is preparing for Harvest Fete.
– Emmy and Emmy-Black

Emmy decides to tell him her feelings at this special Fete night.
– Pearl Girl and Pearl Girl-Pink

As night came, they left the hustle and bustle and came to the quiet grassland.
– Lantern Dream

Emmy cherishes every day spent with him, no matter it's shopping, or reading.
– Flourish Peach and Flamboyant Blossom

I will return, and by then we will adore the clouds together. This is his promise to Emmy.
– Butterfly Ring

Heard that to write down your dream on the lantern and release it, and the dream will come true.
– Lanterns of Destiny

Another year came, and she is a kid no more. Clever as usual, but she now has a demure manner.
– Flowers in Summer and Colorful

I'll wait until you return and play that Lovesick Memory for me.
– Butterfly Lock

The young girl feels like smiling so much like there is no trouble in this world at all.
– Slender

With the suit Flute's Thoughts
Add a photo to this gallery

Retrieved from "https://lovenikki.fandom.com/wiki/Lantern_Wish?oldid=132642"
Community content is available under CC-BY-SA unless otherwise noted.