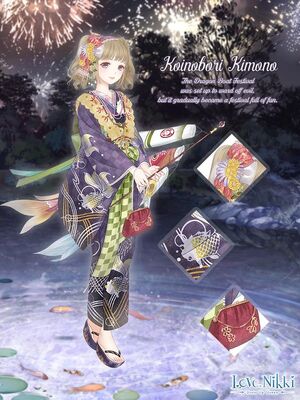 The Dragon Boat Festival was set up to ward off evil, but it gradually became a festival full of fun.

Koinobori Kimono is a Cloud suit that appeared in the Koinobori Festival Event. Its variation could be obtained from the event. It can now be obtained through Recipe Crafting.

In early May, the north of Cloud Empire witnesses the last sakura blossom every year.
– Late Blossom

The Dragon Boat Festival[1] was set up to ward off evil, but it gradually became a festival full of fun.
– Goldfish and Water

The ocean tide floods in the morning and ebbs in the evening, followed after the Moon.
– Friend of Moon

People use calamus[2] to make shoelace. They also hung calamus under eavesdrop to ward off evil and disease.
– Calamus Geta

Koinobori[3] comes from 'Carp swims upstream to become a dragon'. It symbolizes good hope and arrival of summer.
– Moon Night

Legend has it that ghost fire is sometimes spotted on the sea. Someone shot them but it turned out to be bird.
– Heron Fire

The streamer highly raised is like a dragon flying in the sky, a wish from parents to children.
– Koinobori Kimono

The girl and Taoxiang were going in the same direction. They talked about the carp banner on the way.
– Carp Banner-Dream

Princess Blossom departs from the south in March and arrives at the north in May. Sakura blooms in every place she passes.
– Sakura Bag

At the Dragon Boat Festival, Momoka went to the temple fair with her parents and younger brother as in the past.
– Late Blossom-Dream

When Momoka realized she strayed away from her families, it's time when Moon fully rose and tide flooded.
– Godfish Stream-Dream

Momoka wore her wrap messed up in the crowd again and found a girl stood not far away.
– Friend of Moon-Dream

Shoelaces made of calamus bound on her feet. She's smiling lovely and coming over.
– Calamus Geta-Dream

There were still some people dancing late at night when they went back to town.
– Moon Night-Dream

On their way to the town, two girls saw a bird in blue flame. They ran away in laughter.
– Heron Fire-Dream

Taoxiang leant on the girl's shoulder and fell asleep. When she woke up, the girl left and there was only a small satchel.
– Sakura Handbag-Dream

Spring is going away. The sakura in the north of Cloud Empire always bloom at this time.
– Late Blossom-Twilight

It's the first Dragon Boat Festival after Momoka became a grownup. A fletching-pattern robe shows her maturity.
– Goldfish Stream-Twilight

The warm and comfortable soft cape was a birthday present from her mother.
– Friend of Moon-Twilight

Mom wove evil-warding calamus into shoelaces and tie them onto Momoka and her brother's feet.
– Calamus Geta-Twilight

The Moon set in the west, the two girls walked on the night street like two good friends after a long departure.
– Moon Night-Twilight

The wind in the night is gentle. By the end of the street, Momoka saw the girl smiling like a sakura again.
– Heron Fire-Twilight

It's Dragon Boat Festival soon. Every time when the festival comes, Momoka would think of her.
– Koinobori Kimono-Sunset

Before going back home, Taoxiang gave the girl a handbag in return for the cherry blossom bag she was given years ago.
– Sakura Satchel-Twilight

Koinobori Kimono is about the Dragon Boat Festival in the Cloud Empire, in early May after the sakuras have left to celebrate the arrival of summer. The festival's origins were intended to ward off evil, but evolved to become a fun festival.

It centers on a girl named Momoka (also referred to as Taoxiang or 桃香), who regularly attends the festival with her parents and her younger brother. She was separated from her family and got lost in the crowd. However, she met a girl who came over to her. They walked around together and saw a bird in the blue flame in the ocean. The blue flame is referred to as ghost fire and is a common sight during the festival. Momoka fell asleep on the girl's shoulder, and once she woke up she saw only a small cherry blossom satchel.

In her adulthood, Momoka attended the Dragon Boat Festival again, thinking of the girl from years ago. She wore a cape that was a birthday present from her mother along with a fletching-pattern kimono. At the end of the street, Momoka saw the girl again, and they spent the night walking together like old friends. She gave the girl a handbag in return for the cherry blossom bag that the girl had once given her.

[1] The Dragon Boat Festival, sometimes referred to as the Duanwu festival, is a Chinese festival that occurs near the summer solstice each year.

[2] Calamus, or Acorus calamus, is a plant traditionally used in the Dragon Boat Festival to ward off evil due to it resembling a sword.

[3] Koinobori (鯉のぼり) are Japanese carp streamers that are traditionally flown during Children's Day, a holiday taking place in early May each year.

The suit and its variations
Add a photo to this gallery

Retrieved from "https://lovenikki.fandom.com/wiki/Koinobori_Kimono?oldid=93995"
Community content is available under CC-BY-SA unless otherwise noted.