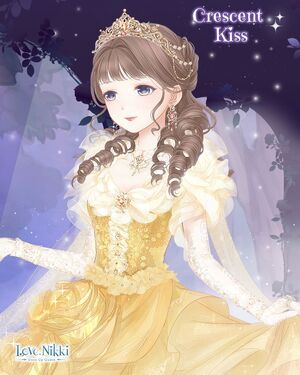 I liked to sketch in the Pigeon Forest in early morning. The figure reflected in stream was him, the person I waited for.
– Vera

Yass and I fell in love in that spring. It was a love passing through the fog forest, but I was locked up by my father.
– Mysterious Dream

I broke the window and ran to you. I knew it was you. Your eyes have never changed whether you were human or monster.
– Lost under Moonlight

Even though the road ahead was full of obstacles and brambles, I will never give up if there were moonlight and you.
– Crescent Crown

Elf witch, I will stand any tests if you can break Yass's spell and let us get together.
– Falling Stars

Crossing Crescent Forest's, the grand castle was under the moon. The elf witch said that we passed the love test.
– Eternal Time

In that morning, I saw your ears of orks that you tried to hide. You are my prince whoever you are.
– Endless Love

When the crescent rises above the top of Nemea Castle, I will be back. I promise you.
– Crescent Appointment 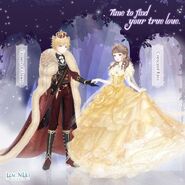 With the suit Crown of Dawn.
Add a photo to this gallery

Retrieved from "https://lovenikki.fandom.com/wiki/Kiss_of_Crescent?oldid=145746"
Community content is available under CC-BY-SA unless otherwise noted.