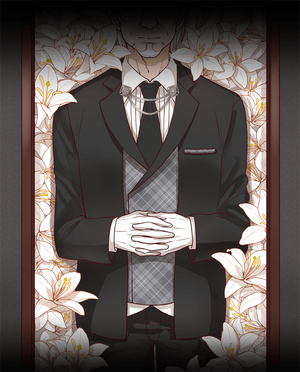 King Sayet was the former King and a designer, who passed away in Year 672, leaving three legacies behind. These legacies sparked the unease that culminated in the Nine-Day War, the competition that resulted in Elle's leadership of Pigeon and her ownership of two of the legacies.

King Sayet was taught alongside the Ancient Pavilion Designer earlier in his life.[2] During this time, they became friends[3] as they learned to become master-grade designers.[1]

While he was young, King Sayet also went to Pigeon Kingdom and designed clothes there.[4] It can be inferred that he is not a native resident of Pigeon.

During his youth, he also crafted a ring and a necklace, both with a delicate crystal butterfly design. The ring was later purchased by Chairman Schiller for a high price and kept in the treasure room of Apple Apparel Group, while the necklace ended up with Nidhogg.[5] Cali noticed the necklace begin to shimmer after Nidhogg activated the blood curse.[6]

In Year 672, King Sayet died. This prompted the Nine-Day War in order to prevent nations from fighting over the three legacy treasures he left behind. Two of the legacies went to Princess Elle, and the last one went to Hostess L.[7]

King Sayet and the Ancient Pavilion Designer were old friends who were instructed together, and both became powerful designers.[2][3] As adults, they did not often visit each other, leading Fu Su, the Pavilion Designer's disciple, to believe that they had had a falling out.[8] However, at King Sayet's funeral, Fu Su realized that they did not have a rupture after all.[9]

Retrieved from "https://lovenikki.fandom.com/wiki/King_Sayet?oldid=98689"
Community content is available under CC-BY-SA unless otherwise noted.