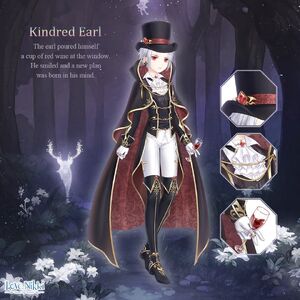 The earl poured himself a cup of red wine at the window. He smiled and a new plan was born in his mind.

Once upon a time, there was a vampire earl living in a castle. He and a strayed human girl lived a happy life.
– Silver Moon Night

With the feather pen in hand, the earl sighed and crossed out the words he'd just written.
– Earl's Cloak

People are complaining that our target audience is too young. On the meeting, a bat from support department reports
– Refined Swallowtail

Girls now don't like his simple and sweet stories. The earl scratched his hair in depression.
– Mysterious Taboo

His hairline, which has overcome the test of time, now falls back under the pressure of innovation
– Elegant Boots

Earl logs in a web popular among girls, trying to figure out what's in trend now.
– Symbol of Status

So, what's this one of highest hits? His red eyes scanned the lines. To his surprise, it's a story about him!
– Cross Earring

The girls' comments are even more surprising. To urge the writer to update they even use cute kaomoji! [1]
– Date Tonight

The earl poured himself a cup of red wine at the window. He smiled and a new plan was born in his mind
– Kindred Earl

The suit is about an Earl who is also a Kindred. He lives a happy life in a castle with a human girl. He has a career as a writer, and he normally writes simple, sweet stories. However, a bat who works in the support department tells him that their target audience is too young, and many girls don't like his normal style of stories. Feeling pressured, even his hairline starts to recede.

In order to figure out what's trendy, he logs in to a forum popular among girls. However, he's surprised to see that one of the most popular stories is a story about him. The commenters use kaomoji to encourage the writer to update. As the earl reads their comments, he pours himself a cup of red wine and smiles, a new plan forming in his mind.

[1] Kaomoji are Japanese emoticons made up of text.

Retrieved from "https://lovenikki.fandom.com/wiki/Kindred_Earl?oldid=146318"
Community content is available under CC-BY-SA unless otherwise noted.