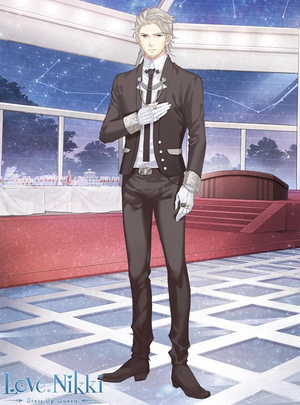 Joe is an adult male with fair skin and sharp, small grey eyes. He has slight silver facial hair to match his thin eyebrows and chin-length hair, which has several strands slicked back.

He wears a black tailored suit with gold and silver details. He also wears a long black tie and several silver chains sewn to the lapel of his jack. He also wears gloves with several rings and a chain on each wrist.

Mr. Joe is a handsome and professional man with an air of elegance and maturity. His main role is to be the companion of his boss' daughter and heiress, Kimi, and he fills it to the very letter. Joe is mostly serious to a fault, but he seems to be pretty snarky when he wishes to, like whenever he's ignored to favor Kimi.[3]

He is a kind and understanding teacher, displayed when he once went to teach a semester at Cicia Design School. He set an assignment to design a suit based on a flower, but one of his students, Lirue, misunderstood and based it on cotton instead. However, he smiled at her and told her it was an exceptional effort despite it being an accident. This caused Lirue to develop a crush on him.[4]

Joe is also said to be a ladies' man in his free time,[5] with several people speculating on his love life. It's rumored that he dated a popular model from Apple Federal,[6] which could possibly refer to Hiber, who he has apparently asked out hundreds of times.[7] Some of his designs are also surprisingly provocative, like his masterpiece: the high heels Snakes of Temptation.

Joe has designed the following suits:

He has also designed the following items:

In this year, Joe served as the chief designer for the Apple Apparel Group and worked for Kimi's father, Chairman Schiller. The Apple Apparel Group was going through a rough time financially, and Schiller's designs were criticized. When sixteen-year-old Kimi expressed interest in helping the Group out, Joe agreed with Schiller that she should not interfere.[8]

Joe traveled around with Kimi and attended the December Troupe's performance of 'Candy Witch and Star Sea' in Cicia,[9] the Designer's Tea Party in Wintermount,[10] and the Fantasy Styling Contest in Royal City.[3]

After the Apple Apparel Group's leadership was transferred from Schiller to Charles and Kimi was attacked, Joe feared he would be attacked as well and went to his art gallery in Hosa, Welton.[11] Kimi found him there and tried to convince him to give her tickets for the upcoming White Blossom Banquet so that she could investigate further; however, Joe only procured the tickets after Nikki suggested to go with her with Kimi in disguise.[12]

They are shown to have a close relationship, working together to design outfits together[13][14] and traveling together. There are rumors about them being romantically interested in one another, but they aren't.[15] Regardless, Joe cares a lot for Kimi's wellbeing and seems protective of her,[8] especially when she wanted to attend the banquet that he felt could be a trap.[12]

Retrieved from "https://lovenikki.fandom.com/wiki/Joe_Brownie?oldid=101770"
Community content is available under CC-BY-SA unless otherwise noted.