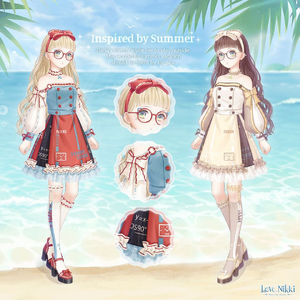 Daria's friends invite her to play outside. The wonderful summer vacation should be spent by the sea.

Inspired by Summer is an Apple suit that could be obtained during the Garden of Spiral Staircase Event.

Daria fell into a stupor looking at the registry, wondering if she should enter the design competition.
– Summer Trouble

After several editions, Daria finally feels confident enough to hand in her work. She hopes for some encouragement.
– Watercolor Timer

After a week Daria finally receives words from her advisor. It feels like ages, maybe Daria has been too anxious.
– Fuzzing Thoughts

The tutor did not go easy on Daria. It was the third draft she handed in, but it was still not good enough.
– Path to Victory

An iced americano to calm the brain. Daria decides to abandon her old ideas and seek some inspirations.
– Summer Butterfly

Maybe friends are right. It's better to relax for now and enjoy the vacation.
– Cat Ear Frame

Daria's friends invite her to play outside. The wonderful summer vacation should be spent by the sea.
– Light Sea Salt

The seaside summer celebration is lively, but Daria's mind is somewhere else.
– Peculiar Beach

Although the tutor is strict, she has been waiting for Daria to come up with something great.
– Platinum Modesty

While tourists admire the fireworks on the beach, Daria restarts thinking about the design for the match.
– Carbon Timer

Frustration and confusion were only temporary. Daria believes she will come up with a satisfactory design.
– Swinging Thoughts

Although it's a pain to design and brainstorm, the joy the final design can bring to Daria is overwhelming.
– Butterfly of Inspiration

This summer will be remembered for the satisfaction felt from completing the design.
– Cat Ear Frame-Orange

Beautiful clothes make people happy, including the designer and the wearer of the clothing.
– Fresh Vanilla

In Inspired by Summer, a girl named Daria contemplated whether she should join the design competition when looking at the registry. She had trouble coming up with a good draft though; she had thrown yet another draft in the garbage bin when she found the simple puff sleeve of the upper garment still lacking. Even so, after several editions of revising, Daria finally felt confident enough to hand in her work. Hoping to receive encouragement, she was so anxious that the wait felt like ages, but after a week's worth of waiting, she finally received feedback from her advisor. Unfortunately, the tutor did not go easy on her and it was still not good enough; this was the third draft she had handed in already. Despite the tutor's strictness, she was still waiting for Daria to come up with something great.

While drinking an iced americano to calm her brain down, Daria decided to abandon her old ideas and seek some inspiration. Frustration and confusion would only last temporarily; she truly believed that she would come up with something satisfactory. Perhaps she needed to relax with her friends and go on a vacation? It was better than to burn herself out, and thus she invited her friends outside, because a wonder summer vacation should be spent by the sea.

There was a seaside summer celebration going on but Daria's mind was somewhere else. While the tourists admired the fireworks at the beach, Daria thought about her competition design again. In the end she managed to come up with a new draft, which she put into a stamped envelope and sent away. While the process of designing and brainstorming was a pain, the joy from finally completing it was overwhelming. That summer would be remembered for that very reason.

Retrieved from "https://lovenikki.fandom.com/wiki/Inspired_by_Summer?oldid=134173"
Community content is available under CC-BY-SA unless otherwise noted.