Icewind Warchant, also known as Battle Song, is a North suit that can be obtained through crafting. It is known to be a very hard suit to obtain due to the large amount of materials needed. It is also customizable.

At sunset, Yunikina heard a song of the forest, ocean, tundra, and unyielding warriors on frozen soil.

The song originated from the residence of Yegle, where he played the zither, overlooking the setting sun while singing of their homeland.

Yegle is a mere folk musician and cannot put to use the simplest dagger to protect himself. Yet his lord is deeply afraid of him. He dispatched Yunikina, hoping she is able to restrain the musician from being a troublemaker.

Yunikina's supervision restricted Yegle's movements, even if he left the Family to sell things or exchange bread, masses of soldiers like flies, would follow him. Now no one came to his place to sing songs. However, Yunikina was surprised by how calm he was about this. He still plucks the strings, singing songs in his confinement as he used to sing in days long gone by.

His zither resounded like a flowing brook in the summer, and his singing resonated like a lark on a crisp winter morning. He sang of plain weeds in the wilderness, of flurries invading birch forests, of bonfires in the country borne of jubilation, and the beautiful mountain girls on a spring morning. The destitute heard in his songs the hope for tomorrow that is feared by the corrupt. And what about Yunikina?

At sunset, she heard her hometown, thousands of miles away, a small village that reduced to rubbles during the war.

She should have watched Yegle but she had turned from him, so her tears could fall unnoticed.

'You are truly talented,' she said to Yegle, 'Don't talk to the Revolutionary Party. Don't destroy yourself.' Yegle thanked her but could not listen to her exhortations. His music spread faster than a sudden gust of wind, through the uninhabited Iron Forest to the prosperous White Stone City, and was on the lips of everyone as a song of liberty. The lord has changed his mind; persecuting Yegle may incite a riot, but he lives, and the song of the aristocrats' nightmares would never end. In one night, the secret police took many young members of poet societies, and Yegle was missing. Some said that he became a court musician, and others that he had sold out his friends. Even the latest army song was tagged with his name, couldn't it justify all suspensions?

Yunikina's temporary job concluded, yet she still missed the lost troubadour. On vacation, she couldn't help but went back to Yegle's residence. Outside the tower bungalows stood her gun-toting troops. She dismissed them and entered the Family. His room looked like it had been looted. She gathered the scattered music scores and letters and discovered designs that were incomplete.

'Dedicated to Yunikina and our snowy plains.'

'This person is a complete idiot!' If Yunikina had not come, would his reputation have been eternally disrespected by that scum? Yunikina picked up this gift carefully. At that moment someone knocked impatiently on the wooden door behind her, and fear was heightened with the threat of gunfire. Yunikina pressed against the table and stood up expressionless. She completely understood: while she watched Yegle, very many eyes watched her from the shadows. Today's knell sounded for the young people who were arrested, and tomorrow more people would be buried together for the rotten state.

She silently freed the pistol from her waist and hid in a dark corner of the bookcase. She is an excellent fighter, expert marksman, and perfectly capable of escaping from here -- so let Yegle's hope relight the fire on a snowy expanse.

In the space of an afternoon, Yunikina, once the White Stone City's youngest second lieutenant, became a criminal undertaking a conspiracy. During the bitterly cold night, she questioned herself repeatedly: Was this cost worth it? Should she go back to the lord, kneel before him and admit her mistake? Could she regain her honor?--

'No, that is downright humiliation!' She had done nothing wrong, and neither had those that sacrificed themselves.

Their only charge was a deep love for this frozen patch of soil.

Yunikina found Yegle's comrades and published his last poem and the circumstances of his death. The musician's sacrifice caused a large ripple within the pool of suffering, and the reign maintained by fear finally broke. People waving farm tools approached the castle, and the guards stopped them-- In the here and now, the styling contest has become the last straw for the corrupt lord. How can enraged citizens agree? The one who breaks the order will pay the price for it!

The malicious lord laughed in his tower, for he knew the army of the North was on its way, and the peasants -- no match against the guards -- had no chance. He would win!

But these were his dreams, not reality.

There was a steed that came from dust and brought the long-awaited dawn to The White Stone City. The general rode on horseback dressed in armor designed by her lover in heaven. The first light of morning reflected off the banners at her back; she led a new army. People volunteered to join the troop and march to the White Stone City......

This is the story of the White Stone City in the North Kingdom. You ask me where I learned these things?...

'Oh, the northern wind is carrying the poet's song. Can't you hear it?'

The dawn will light up the world tomorrow. The night will dim with the fallen snowflakes, shining in a dream.
– Sunrise Pledge

Have you heard the north wind’s song at night? It is a poem of the past and promise of future freedom.
– Daylight Stars

They curse you, but I praise you. I have hope in myself to plead for the cold and gentleness of the snowland.
– Ode of North Wind

Gods favor the kingship, but freedom will guide the people forward.
– Road of Faith

The place covered by snow is our homeland where we haven't been back for years.
– Home Earth

Honor and pride are useless. Only the song of north wind has never stopped.
– Winter Storm

Eunikina's iron helmet was decorated with the feather of frost hawk which was a trophy she got in early years.
– Frost Feather

She brought the freedom and equality. The story of Yunikina runs on the frozen land, warming up every heart.
– Enlightening Chapter

The story of Yunikina fighting the lords are popular, but nobody mentioned her courage to leave White Rock City.
– Glory without Regret

Before the broken ice melted, the young life has gone. Your desperate call gets no answer.
– Sad Winter Song

She monitored Eagle, but there were more people eyeing her. It's a dark time when the human heart is an abyss.
– Black Iron Times

She rode on a vast and cold dark field. She didn't turn back until the north wind brought the flaming morning.
– Silent Spark

The only charge is their deep love for this frozen land.
– Revenge Road

What kind of scenery was she looking at? It was the pale and gloom snowfield, buried with war memories.
– Imprints of the Past

The flame flower is a flower in the north whose petals are fire red, blooming on the coldest winter night.
– Flame Flower

The were born at the most ruthless land in Miraland. The weak ones are waiting for death.
– Shadow Forest

She never chases after honor or fame because the dream of freedom is too beautiful and delicate.
– Fearless Journey

Revolution didn't choose Yunikina, but she walked to revolution.
– Daughter of Snowfield

The sun has melted the snow on armor. The glory of heroes is shining at the end of nights.
– Battle Song

The night will end and the dawn will come to the White Rock City.
– First Light of Morning

The legend of Yunikina may fade with time, but the poem of freedom will never be forgotten.
– Sword and Poem

The suit Icewind Warchant tells the story of Yunikina, a legendary North soldier. She met an inspirational folk musician named Eagle, and courageously fought the lord of the city after Eagle was killed. She dreams of freedom and revolution and cares little for honor and fame. Her story may fade with time, but her quest for freedom is timeless.

The unposed suit and its recolor 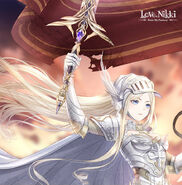 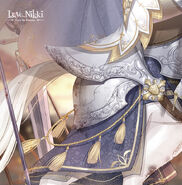 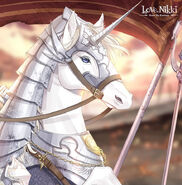 Higher quality image of the suit

Retrieved from "https://lovenikki.fandom.com/wiki/Icewind_Warchant?oldid=131368"
Community content is available under CC-BY-SA unless otherwise noted.