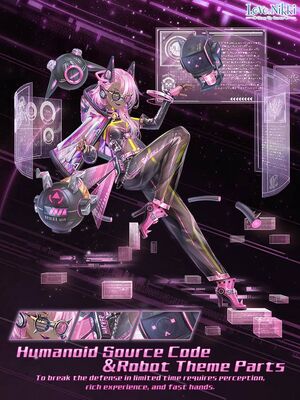 Game of Hackers
Game of Code
Eyes of Hunt
40

Humanoid Source Code is a Ruin suit that appeared in the Mind Code Event.

Lines of codes kept rolling on the screen. All the characters become bright pink. This is the style of Clack.
– Glowing Pink

Named 'Coder' when she was born, Clack began to build programs when the other children are building blocks.
– Glassesless Illusion

The ten fingers of Clack flip like light, and lines of code pop out on the screen, building a kingdom of hers.
– Coder


After taking a short nap, Clack brings out a hidden program. Here, her identity is completely different.
– Interpreter


Sneak into the server through a loophole, when detected, escape from the system backdoor. It's a silent war.
– Online Track


As a member of the organization '01', she often maneuvres using the servers of those big companies.
– Hacker Cat Ear


To break a firewall is more interesting than the secret behind. Her skill improved with every challenge passed.
– Bluetooth Earphone


If someone maliciously spreads viruses, 01 will step out to stop it and disclose the villain behind.
– Hidden Glasses


The controversial behavior of 01 incurred lots of debates online. But, the hackers in it are the best.
– Bi-thread Chain


Clack once competed with others over deciphering, but her gloves alone are faster than the opponent.
– Gloves of Decipher


When you encounter a bottleneck, it's disappointing like a weak signal. You can only wait for the breakthrough.
– Breakpoint Resume


The servers of the big companies can no longer interest Clack. Her challenge has transferred to other places.
– Redundant Data


A big holographic screen can house many windows with more contents. Real-time information is the key.
– Holographic Screen


When the hunter spots the prey, there is no escape.
– Eyes of Danger


Multi-thread contest interests Clack. The error reports on the screen only make her even more exciting.
– Game of Hackers


In the contest, a face formed by characters appeared on the screen and said, 'Do you want to play a game?'
– Game of Code


A smile of ease is on her face. From her eyes you can see expectation and the inestimable strength.
– Eyes of Hunt


A hacker doesn’t have to stay in a dark room all day long. She would set up the program—to enjoy a sunbath regularly.
– Hacker’s Secret

Clack is a hacker that works for an organization called '01'. She was nicknamed "Coder" when she was born, and has spent her entire life building programs.

Retrieved from "https://lovenikki.fandom.com/wiki/Humanoid_Source_Code?oldid=162056"
Community content is available under CC-BY-SA unless otherwise noted.